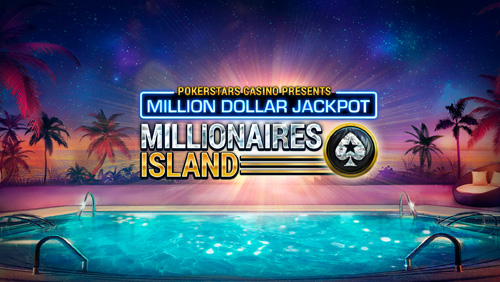 ONCHAN, Isle of Man – February 2017 – A university student from Uruguay has turned just $1.00 into $1,517,303.08 on Millionaires Island to become the first ever jackpot winner on the million dollar progressive slot, which is exclusive to PokerStars Casino, an Amaya Inc. (NASDAQ: AYA; TSX: AYA) brand.

The Uruguayan player, whose screenname is “LuisCancelaU”, had been playing this popular slot game for three minutes, spinning just 17 times, before four Millionaires Island symbols appeared on the reels, and he needed just one more to hit the jackpot.

“It won’t appear, these things don’t happen,” the 26-year-old, who preferred not to be personally identified, told PokerStars.

Then the fifth symbol appeared and the jackpot feature went off to celebrate his incredible life-changing winning moment.

“I ran to my brother who was the only one in the house…I started shouting and shaking him and he was looking at me completely perplexed…I showed him my account so he would believe me. We hugged and cried, not because of the money but because we now would be able to give something back to our parents who have fought so hard to give us anything we needed.”

The first ever Millionaires Island jackpot winner is currently studying for a degree and is extremely thankful for what his family have sacrificed for him. He is delighted that he can now give back and provide them with a secure future. You can read more about his story here.

“We’re truly delighted for ‘LuisCancelaU’,” said Bo Wänghammar, Director of PokerStars Casino. “We knew it wouldn’t take long to create a millionaire after our exclusive slot received incredible early play. This is a sign that we’ve built a great game for our players. It goes to show, that life changing winning moments are accessible to anyone that wants to play for them. We’re now looking forward to making more winners, from our growing slot portfolio.”

Millionaires Island is the only slot game in the online casino industry with a brand exclusive Progressive Mega Jackpot of at least $1 million. Every jackpot winner will become an instant millionaire making this one of the most consistently exciting slot games in the world of online casino.