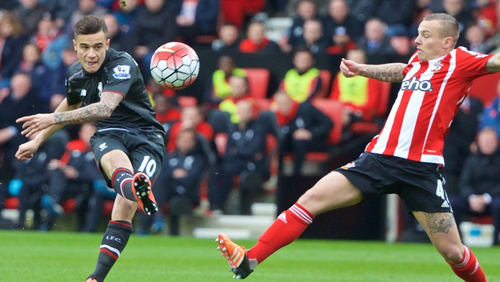 Southampton are on course to make their first Football League Cup Final appearance since 1979 after beating Liverpool by a goal to nil in the first leg at St Mary’s.

Southampton has one foot in the English Football League Cup (EFL) Final after beating Liverpool 1-0 at St Mary’s. It’s been 30-years since Southampton had appeared in a League Cup semi-final, and it was Liverpool that ended their hopes of a Wembley appearance back then; Nathan Redmond is trying his best to make sure there is not a repeat performance.

Redmond has been a revelation since joining Southampton from Norwich in June, but he had not found the back of the net in 15-games until facing Liverpool. He is lightning quick, finds space, but he needs to improve his output at the top end of the pitch if he wants to make the grade at a higher level.

The former Norwich winger could have scored four as Southampton, who played without the ball for much of the game, made amends for their 6-1 thrashing in this competition last season.

The first real chance on goal came the way of Liverpool as Firmino saw his firm shot saved by Fraser Forster. Not long after, Redmond found time and space in the box only for his shot to be saved by the Liverpool keeper, but he put away his second chance one minute later after being put through on goal by the hard-working Jay Rodriguez.

Philippe Coutinho came on for his first appearance after a period in his sick bed, but not even the silky skills of the Brazilian could penetrate a solid Southampton defence.

At the other end, Redmond had another couple of chances including one that came back off the bar after some great work from Southampton substitute Shane Long, but in the end, a goal advantage would have to do.

It’s a big month for Liverpool, and they would have wanted to have started it better than this. They face Man Utd at Old Trafford on the weekend in a crucial Premier League tie, before the return leg with the Saints, and a date with destiny with league leaders Chelsea at the end of the month.

Southampton, who are still to concede a goal in this competition, will be delighted to take Liverpool’s scalp after losing three of their previous four games in all competitions.

The EFL routes so far