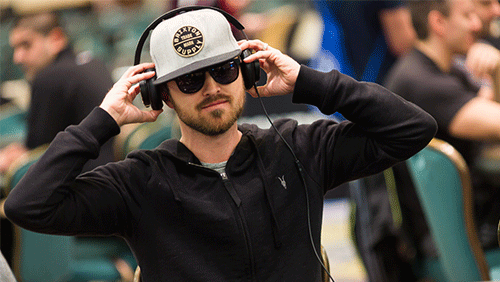 Some of the world’s best poker players have descended on the sun-drenched island; there are also some recognizable players who have had success in other fields.

Aaron Paul is most identifiable for his role in Breaking Bad from 2008-2013, his latest show, The Path, has its season two premiere on January 25. This isn’t Aaron’s first foray into the world of poker having played among international fields in the past, and recently taking on superstar footballer Cristiano Ronaldo heads up in Duel by PokerStars. He has been playing poker for over a decade and his passion for the game is evident.

Hollywood actor and comedian Kevin Hart continues in his PokerStars experience in a $50,000 buy-in tournament.

We are now on Day Four of the action with five days remaining in the inaugural PokerStars Championship Bahamas. Players have descended from around the world to take part in the extravaganza with 98 tournaments, on-going cash games and plenty of non-poker activities and competitions.

Yesterday there was a successful Breakfast Q&A with Daniel Negreanu on Tips and Tricks for the Main Event which was very well attended. Today players were treated to a Q&A on Twitch with Jason Somerville, Kevin Martin, Jaime Staples, Randy Lew and ElkY. Tomorrow will see the Open Pro Forum on life inside and outside poker.

Note:  Photos attached free for you to use in your articles. Credit: Neil Stoddart and Rational Intellectual Holdings Ltd