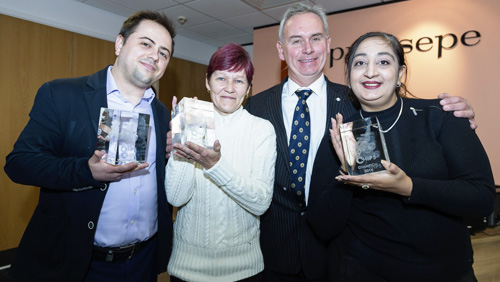 Three staff members working for Praesepe’s Cashino brand of adult gaming centres, were honoured for their fund raising activities in aid of the children’s charity, CHIPS. Since becoming a partner of the charity, Praesepe has succeeded in raising more than £650,000 – sufficient to purchase 120 specialised wheelchairs for children and young people with severe mobility problems. The three were honoured in a special award presentation held at the company’s head office in Milton Keynes, UK.

Mas Bibi said: “It’s a great privilege to be the CHIPS Charity Champions for the company. I couldn’t have raised such an amount without the support of my team and of course the wonderful Cashino customers, who were incredibly generous with their donations.”

Praesepe CEO, Nick Harding added: “Mas, Diane and Christian have done an outstanding job raising funds for CHIPS, motivating customers and colleagues to donate through a wide range of imaginative initiatives. Thanks to the hard work, the compassion and the dedication of the entire team at Praesepe we succeeded in raising a further £150,000 in 2016, a sum which takes the overall total raised for CHIPS to more than £650,000.”