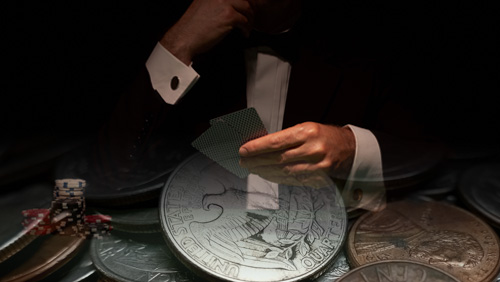 After Troy Quenneville wins $620,000 at the World Poker Tour Caribbean Main Event and the partypoker Millions, Lee Davy, asks a selection of poker pros their thoughts on flow.

Nobody remembers the runner-up.

So, when Niall Farrell locked up part two of the Triple Crown with victory at the partypoker sponsored World Poker Tour (WPT) Caribbean Main Event, I didn’t care who finished second.

A few days later, and I was scouring through social media, looking for something to write about, when I saw the name, Troy Quenneville. A bell was ringing.

“Where had I heard that name before?”

It turns out that Troy defeated 526 entrants to win the $400,000 first prize in the $2m Guaranteed partypoker Millions, days after he finished runner-up to Niall Farrell in that WPT Main Event.

I took a look at the guy’s Hendon Mob statistics and was greeted by cobwebs. The lad had won less than a thousand bucks in his lifetime, and now here he was topping final tables that included the likes of Erik Cajelais, David Yan, Ari Engel and Martin Kozlov.

What the hell was going on?

There were 323 entrants in the WPT Main Event and 526 participants in the Millions event. To get through fields of that size, and to defeat the quality that often rises to the top, cannot be pure luck.

Was Troy Quenneville experiencing a deep sense of flow?

The Hungarian psychologist, Mihaly Csikszentmihalyi, coined the term ‘flow’. The man with the tongue twister of a surname wrote a book on the topic called Beyond Boredom and Anxiety: Experiencing Flow in Work and Play (1975). He was inspired to put thought to paper after watching a free seminar hosted by a young psychologist called Carl Jung just before the second World War.

“What contributes to a life worth living?” Asked Csikszentmihalyi.

His research led him to believe that human beings were at their happiest and most optimal when they experienced a moment he called Flow State. In sporting terms, we know this as being In The Zone – the moments in your life when time stands still, and you can seemingly do no wrong. And it was this state that I assume Troy Quenneville found during his crazy week in Punta Cana.

Steven Kotler, the author of The Rise of Superman, writes that during optimal flow states, parts of your pre-frontal cortex (PFC) shut down creating heightened attention and a loss of self – all geared towards increasing your mental abilities so we can achieve mastery at a much faster rate.

Essentially, what Kotler is suggesting, is that we overwhelm the brain with intense focus and action, so the PFC shuts down the necessary parts to enable us to reach this state, and it was something that I had felt before.

What do the Pros Think About Flow?

I have experienced a state of flow playing poker several times in my lifetime. Once was at the Grosvenor United Kingdom Poker Tour (GUKPT) in Blackpool. I finished 13th in the £1,070 Main Event and then made the final table of a side event the following night.

I felt like a complete boss. I was fearless. Looking back now, I know that I was one of the weakest players in the field, but I felt like one of the strongest at the time. I thought I was going to win both events. And the biggest change I felt was my amped up aggression and willingness to take risks. I watched people turn to stone as I eased into my flow state.

I wondered if my feelings were familiar and reached out to several pros to seek opinion.

Calvin Anderson is a big believer in the role that flow plays in poker. Here is his description of the phenomenon:

“Being positive, believing in yourself, and harnessing energy to focus in areas one desires to succeed are essential keys to success. But understanding your self and trusting your intuition is where everything is moving towards. Once we understand, deeply, how our own self-works, we can trust our bodies or intuition and achieve a true flow state.”


Anatoly Filatov will be hoping his Moscow Wolverines reach a flow state during the Global Poker League (GPL) PlayOffs. Here is his view of flow:

“It is an amazing feeling when you are a part of this process. You make fewer mistakes because your focus on the game inspires confidence, motivation and the mental power to reach a flow state.”

“When achieving a flow state, there is no room for second guessing since your decisions are driven more by instinct. A flow state creates more self-confidence, and the correct decisions stand out quite clearly. It helps retain focus on what is important.”


It’s not easy to achieve a flow state, but Poker offers one of the surest routes. Going back to Kotler, and he believes that finding novelty and unpredictability in your task can help you find flow. Poker owns the trademark on ‘unpredictability.’

Talal Shakerchi doesn’t find flow often, but when he does, this is how it feels:

“I don’t often feel the full flow in poker, but I guess the way I would describe it is a heightened sense of awareness. An ability to better sense hands before they are shown down. Awareness of small detail, greater focus, insusceptibility to distraction and a feeling that decisions are made by instinct without conscious analysis.”


Jamie Gold believes the flow state is what separates the great player from the extraordinary player.

“It takes a while for me to get into that state, mentally and physically. Once in that state everything slows down, nothing distracts you and you see and feel things that others are not experiencing. You have a heightened sense of what’s happening.  ‎It’s an incredible and rare feeling. I think that’s what separates the great player from the extraordinary player, how often you can find that zone. You seem to know exactly where you are in any given situation, and the precise hands your opponent holds.”

Is this what happened to Troy Quenneville?

Did he manage to shut down parts of his PFC and heighten his awareness to such a level that all he could see was the action in front of him? Was he immune to distraction? Were his poker instincts on fire? Was he in a full state of optimal flow?

Did he just get lucky?

“I’m not even sure about the definition of “flow” when it comes to poker.” Said Dominik Nitsche. “If it’s defined as playing your ‘A’ game well then I guess the goal is always to bring it.


“I feel the whole concept of flow doesn’t work in poker. For me, most of the hard work is done off the table. That’s when I prepare my strategy and possible adjustments to my opponents. I wouldn’t call that flow, though. When I sit down at my table, I have my strategy, and I’ll execute it.


“I’m sure if I wanted to say flow is a thing I could describe it as the state where I’m picking up on everything. That is just being called focused, though. I’m just not a believer in any kind of momentum. I find people get too attached to short-term results and just because they guessed right once or twice in a row means they are in sort some of ‘flow’.


After soaking in the advice from the pros, I come to the conclusion that Quenneville got lucky, ran up a stack, and the net result was a series of behaviours that led to a flow state.

Does that mean, that Quenneville will be in the same state when he next plays in a live event? If so, he had better have his feet on the ground, as Dominik Nitsche explains.

“Claiming to be in your flow state might lead to worse decisions as you might strive further from what is considered good poker.”