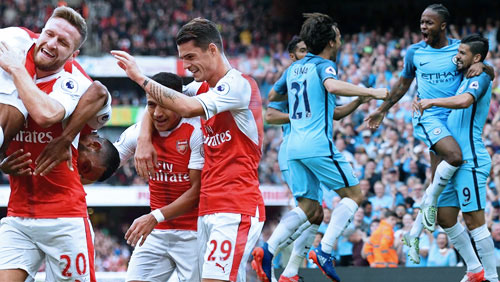 Week 8 of the English Premier League sees Arsenal draw level with Man City at the top of the league after a 3-2 home win against Swansea; Spurs take a point at West Brom to maintain their unbeaten start; Chelsea hammers Leicester.

Arsenal is now level with Man City at the top of the Premier League after a Theo Walcott brace helped the Gunners to a 3-2 home win against visiting Swansea City.

It was Arsenal’s sixth Premier League win on the spin and their 10th game unbeaten in all competitions since being on the wrong end of a seven-goal thriller against title challengers Liverpool at the start of the season.

Former US National coach, Bob Bradley, who was taking charge of the South Wales side for the first time since the board showed Francesco Guidolin the door, must have wondered what he had let himself in for after Arsenal ripped them apart at times in the first half.

Arsenal opened the scoring through Walcott in the 26th minute after some poor defensive play by Swansea left him with a simple tap in. Walcott made it two, scoring his fifth goal of the season, with another tap in on the 33-minute mark, and by this time, Arsenal was flying.

Then with seven minutes of the half remaining, Granit Xhaka had his pocket pinched by Gylfi Sigurdsson, at the edge of the Arsenal box, and the Icelander provided the cool, calm finish Swansea fans have grown accustomed to. Swansea was right back in it.

Arsenal made it 3-1 in the 57th minute after Alexis Sanchez found Mesut Ozil with a clever lob, and the German, celebrating his 28th birthday, smashed the ball into the roof of the net with a devastating left foot volley.

It should have been all over bar the shouting until Swansea were thrown a lifeline courtesy of a red card shown to Xhaka for a cynical foul on Mo Barrow. Bradley’s men poured forward after that and were rewarded in the 66th minute when Baston converted a cross from Barrow to make it 3-2.

In the closing stages, it could have been 3-3 or 5-2, such was the sheer number of chances both sides had to make a difference. The biggest culprit was Walcott who missed a couple of absolute sitters when it was easier to score. The game ended 3-2 to Arsenal, but there were positive signs that Bradley will be the man to steer Swansea out of trouble.

Back to Walcott, and I think people are getting a little bit carried away with his good start to the season. The lightning fast forward has scored five goals in eight games, but he has only ever reached double figures once during his time in the Premier League.

Great players show their consistency over a prolonged period, as do the average players. Walcott has the stats of an ‘average’ player, and the stats don’t lie. Gareth Southgate’s decision to start with Walcott ahead of Marcus Rashford and Andros Townsend during the last two internationals was a baffling one.

How did Walcott respond?

In the Slovenia match, Townsend did more damage in his first five minutes than Walcott showed in both games.

He has started the season well, but he won’t maintain it. There is an injury waiting for him down the line. There always is.

Spurs remain the only unbeaten side in the Premier League after a late equaliser by Dele Alli saw them leave the Hawthorns with a point. In truth, Spurs hammered West Brom and should have come away with all three, but Tony Pulis’s side nearly snatched a cheeky win with Spurs old boy Nacer Chadli putting West Brom ahead in the 82nd minute.

Failing to convert chances when on top has been a feature of Spurs season. Fortunately, Alli kept rampaging forward and got his reward in the 89th minute with a smart finish. It was his third goal in his last five Premier League appearances.

It was the first time Spurs had failed to collect all three points in the past five matches. They sit in third behind their local rivals Arsenal.

Spurs and Arsenal are not alone when it comes to clubs that outclass their opponents but give their opposition chances to get back into the game. After a sterling start for Manchester City boss Pep Guardiola, the same seems to have happened to the Blues.

Man City was scintillating at times against an Everton side who appear to be this year’s, West Ham. Romelu Lukaku continued to show why he is one of the hottest strikers on the planet right now, with a breakaway goal against the run of play in the 64th minute after a great flick by Yannick Bolassie.

Man City, who missed two penalties in the game, equalised through Nolito, who headed home with his first touch after coming on to do just that. He also scored for his country during the international break. It’s three games without a victory now for City. They maintain their lead at the top on goal difference. Everton is now sixth and looks a classy outfit under Ronald Koeman. Only Spurs has conceded fewer goals than the Toffeemen.

Chelsea Move Up to Fifth; Leicester Languish in Mid Table

Claudio Ranieri told reporters that the fans wouldn’t recognise Leicester City after their torrid start to the season. I think they will, Claudio, don’t worry about that.

The Foxes 3-0 defeat against Chelsea is their fourth in eight games, and it just goes to show what a miracle it was that they won the title last season.

The league’s top scorer Diego Costa opened the scoring in the 7th minute; Eden Hazard made it two before the break after some shoddy Leicester defending – Victor Moses continued to impress with the third and final goal in the 80th minute.

Chelsea moves into the fifth spot. Before the match, the bookies slashed the odds for Antonio Conte leaving the club prompting the Italian to tell the press, “whoever made that bet is wasting their money. Conte is the 15/2 fourth favourite to feel the axe on the back of his neck. David Moyes (5/6), Slaven Bilic (6/1) and Tony Pulis (6/1) are likely to blunt the guillotine before for the former Italian national side’s head even gets there.

Here are the rest of the results.