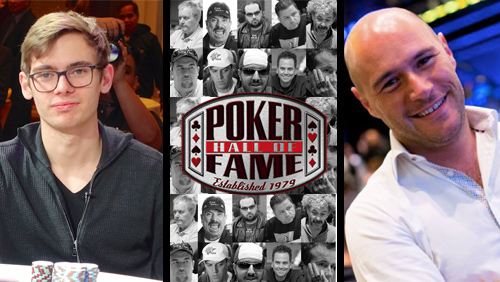 In this week’s poker news roundup we cover Fedor Holz winning another million dollars at the World Championships of Online Poker, the shortlist for the Poker Hall of Fame and Alex Dreyfus talking about the future of staking at the Global Poker League.


Fedor Holz has done it again.

The young German told me he was planning to semi-retire in the summer. It seems like a smart strategy. The lad wins every time he sits down. Holz has smashed the live tournament felt with over $20m in earnings these past few years, but it was the virtual felt that he focused his attention on this week.

Holz entered the $102,000 buy-in Super High Roller at the PokerStars World Championships of Online Poker (WCOOP) as a 20-1 shot according to BetStars. It was a great value bet for the former 2014 WCOOP Main Event winner, but although he chopped the prize money when heads-up, banking a million dollars, he didn’t win the final hand.

The wizard may have hogged the headlines, but it was the past Spring Championships of Online Poker (SCOOP) winner, Bencb789, who defeated Holz to capture the $1.2m first prize.

The way I see it, Holz should get it while he can. At 22-years of age, thoughts of dirty nappies, and the importance of wiping from front to back don’t dominate his mind, unlike Shaun Deeb.

Deeb’s wife was expecting their second child this week, and so the COOP animal did what all caring and loving partners should do at such a time – he jumped on a jet plane and flew to Mexico so he could play online poker. It was worth it, though. He may have missed the birth of is second child, but at least he won a poker tournament and $22,185.60.


Do you remember when PokerStars took all the money away from the Supernova Elite (SNE) players and were criticised roundly for lack of warning?

Well, it seems the largest online poker room in the world has learned its lesson.

Earlier this week, Stars chief comms guy, Eric Hollreiser, wrote a blog post warning players that the VIP Club reward system would undergo another makeover in 2017. Details are sketchy at this early point in time, but it seems the rationale is to expose recreational players to all three verticals of poker, casino and sports betting by linking the three habits under one scheme.

Poker Has a Charitable Week

There was a charitable theme running through the core of the poker news this week.

Vanessa Selbst is busy finalising last minute plans to host her second Justice is Blinds charity poker tournament in aid of the Urban Justice Centre in New York. Daniel Negreanu will be by her side as a support and the likes of Brian Koppelman, Hank Azaria, and Erik Seidel is involved in that one.

Roman ‘RomeOpro’ Romanovskiy vowed to donate 50% of his winnings between August 23 – December 29 to charity and promptly went and finished runner-up in a WCOOP event for $214,929.95. It’s highly doubtful that the Ukrainian will lose all of it by the end of the year, and should that remain the case then charities supported by Raising for Effective Giving (REG), and the elderly and war-affected in Ukraine will benefit.

Partypoker will join forces with the DT38 Charity as part of their Mazagan 10 Poker Festival at the end of the month. The DT38 Charity provides money for research into testicular cancer and is named in honour of former West Ham star Dylan Tombides who tragically died of the disease. Former Wimbledon tennis star, Boris Becker, Sam Trickett, and Roberto Romanello will feature in the festival.

The ONE DROP in Monte Carlo will also host a €1m buy-in cash game and eight side events ranging from €10k – €103k. Good news for the professional poker players hired to coach the whales. They now have something to do with their wages.

The winner of the inaugural ONE DROP was Antonio Esfandiari. He won’t be in Monte Carlo competing with the big boys. Instead, he has agreed to promote the first 888Live Festival in London, held at the same time.

The shortlist for the Poker Hall of Fame is out in the open, and there are a lot of Americans that think the voting is either rigged or stupid. One of the dissenting voices was Mike Matusow who used all his reserves of charm and class to say that Dave ‘Devilfish’ Ulliot only made the cut because he was dead.

Here are the ten nominations

Three players were honoured this week, thanks to the PokerListings Spirit of Poker Awards. Felipe ‘Mojave’ Ramos won the Most Inspirational Player award; Silje Nielsen won the Rising Star award, and Konstantin Puchkov was decreed a living legend.

Ramos is big buddies with Andre Akkari, and the PokerStars Team Pro broke new ground this week when he announced a deal with Puma to act as his secondary sponsor. Akkari also got to carry the Olympic torch during the Rio Games.

Akkari and Ramos are members of the Global Poker League (GPL) franchise, Sao Paulo Mets, and this week Alex Dreyfus talked to CalvinAyre about the future of the league.

The Frenchman spoke candidly about the importance of the narrative of the first season and how it will be used to build upon the development of his key players. The talk also involved the move into staking, a Daily Fantasy Sports product, and how he has so far invested $4m into the project and counting.