A Cinderella story. Most people love hearing such a story – of how a person who started out in a dire circumstance was able to turn his life around and ha 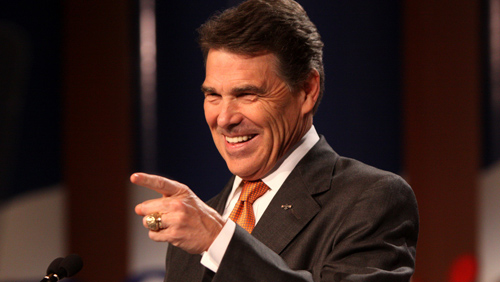 s lived happily ever after. There are those who root for the underdogs, hoping that despite the odds, they will come out the victor. But for some reason, people are finding it difficult to root for former Texas Gov. Rick Perry – even just on reality TV show, Dancing With the Stars. As a backgrounder, Perry failed to get the Republican Presidential nomination, not once but twice and has somehow become a staple of American jokes. Members of the LGBTs hates him for his views on homosexuality and his anti-same-sex marriage stance. For a person stepping beyond the boundary of politics to entertainment with a lot of baggage, Perry is sure to be the underdog in the competition. On Twitter, users poked fun of Perry with one saying “Judging by how quickly Perry spun after his ‘Trump is a cancer’ comment, I guess he already knows the pirouette.” The former Texas governor, who is downplaying his expectations as he prepares to compete in 23rd season of the TV show, dedicated his turn on to veterans like him. But unfortunately for Perry, who is seeking to redeem himself, and the veterans, online sportsbook Bodog predicts that the former governor will be the first to crash out of the competition with a 33/1 odds of winning the title. The other cellar dwellers in the competition are Babyface (12/1); James Hinchcliffe (12/1); Terra Jole (16/1); and Maureen McCormack (25/1). Olympian Laurie Hernandez, on the other hand, is the clear favorite among sports bettors with a 4/1 odds of taking home the crown, followed by TV host Amber Rose with 5/1 odds, rapper Vanilla Ice with 7/1 odds, and Calvin Johnson with 8/1 odds. Like Perry, 12-time Olympic medalist Ryan Lochte will also seek redemption in the hit TV-show after the Rio Robbery Claim scandal. So far, Lochte is in the middle of the pack of contestants with a 10/1 odds, together with Jana Kramer (8/1); Jake T. Austin (10/1); and Marilu Henner (10/1).

But in the world of show business, everything is possible. So don’t be surprised if the rankings change as soon as the show airs on September 12.