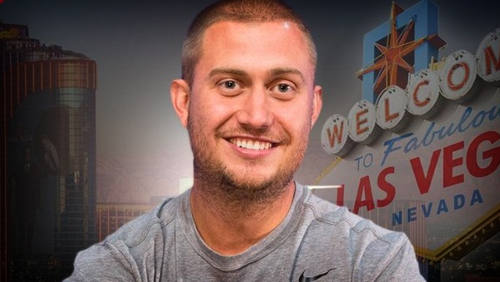 Thompson came into the World Series of Poker (WSOP) knowing he had what it took to be a champion after defeating 389 entrants to win the Heartland Poker Tour (HPT) Main Event in Daytona Beach Kennel Club & Poker Room in October. That victory handed him $131,720, his greatest prize of his career, and he has just beaten that in style.

Thompson defeated 1,397 entrants in the rapid fire level event. The 27-year old from Florida topped a final table that didn’t contain a single former WSOP champion. His most dangerous threat looked likely to be Terry Fan, who had two Macau Poker Cup titles to his name, and a fifth place finish in a WSOP $3k event last year. Thompson eliminating Fan in sixth place after winning a race 99 v KQ.

It was Thompson’s eighth WSOP cash, but only his first final table, and he was humble enough to declare that he was not the best player at the table. Thompson bestowed that honour onto Enrico Rudelitz, and it was those two that eventually played heads-up for the bracelet which Thompson won.

“You always like to think of yourself as the best, but towards the end it was him.” Said Thompson after his win.

Marius Gierse leads the final 47 players into the third day of action in the $5,000 No-Limit Hold’em event. 863 players have created a $4m prize pool. The winner will pick up $800,586, one of the largest payouts of the contest so far. Multiple bracelet winner Dominik Nitsche, WSOP most cashes in a single year record holder Ismael Bojang, and the British pro-Daniel Rudd also made it through.

Vladimir Geshkenbein and Tobias Ziegler lead the brand new Tag Team concept at the end of Day 1. 130 teams remain in contention for the $153,358 first prize. The newest variant of poker at the WSOP attracted 863 teams of between two and four players. Jonathan Little teamed up with his parents; the Mizrachi brothers also felt a little family love would be the right way to win this thing, and Antonio Esfandiari, Brian Rast, and Jeff Gross also formed a formidable partnership in the $1,000 event.

Finally, Michael Huntress ended as the chip leader at the end of Day 1 in the $25,000 Pot-Limit Omaha High Roller. 184 entrants have created a $4.3m prize pool, and the winner will earn over $1.1m. Over 90 players made it through to Day 2 including Ludovic Geilich, Cary Katz and Dan Shak, who all finished in the Top 5 chip counts.