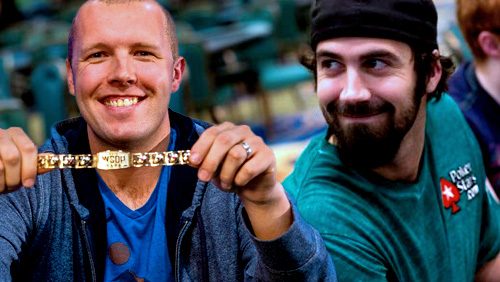 Our review from the World Series of Poker brings you news of a second bracelet of the summer for Ian Johns, a record-breaking Seniors Event, and Jason Mercier leads the Player of the Year race.

Ian Johns is finding gold bracelets at the rate a Beaver finds wood. The 31-year old, who divides his time between Seattle and Las Vegas, has become the second man to win two bracelets this summer. Jason Mercier is the other magnet of gold.

When asked why he didn’t play No-Limit Hold’em events by WSOP reporters after his win, he answered with beautiful honesty when he said: “I used to play, but these guys passed me by aeons ago. I get in the game, and I don’t know what I am doing.”

Stick with what you know Ian; you aren’t doing too badly.

A Spaniard living in the heart of Wales has outlasted a final table that contained four previous gold bracelet winners to come out on top of Event #23: $2,000 No-Limit Hold’em.

Cesar Garcia, 27, originally from the Canary Islands, now living in Cardiff, defeated 1,419 entrants to earn the largest score of his career. It outstripped the $173,874 that he picked up for a sixth place finish in Season 8 of the European Poker Tour (EPT) Main Event in Berlin the year Davidi Kitai completed the Triple Crown.

Michael Gagliano has done BorgataPoker.com proud by winning Event #25: $2,500 No-Limit Hold’em under the auspices of their sponsored pro stewardship.

Gagliano, who plays under the pseudonym Gags30, topped a field of 1,045 entrants to take the $448,463 first prize. It is his first-ever live tournament victory. The closest he ever came to bagging a major title came in Season XI of the World Poker Tour (WPT) when a trip to Prague saw him finish fifth for $103,519.

The 31-year-old New Yorker was making his 10th WSOP cash, and second final table, finishing seventh in this event two years ago. The final table was also a landmark for Darryll Fish, who was making two final tables in a single series for the first time in his career. He finished eighth in both. Former EPT Champion Niall Farrell also made the final table finishing in the sixth spot.

The UK has their first bracelet of the summer and it’s on the wrist of Southampton’s Benny Glaser. The 27-year old has a stunning WSOP win rate with five cashes, three final tables, and two gold bracelets. His first bracelet came last year when he won the $1,500 2-7 Triple Draw Lowball event.

Glaser defeated 934 players on route to a payday of $244,103. He has cashed three times this series and was making his second final table appearance after finishing fifth in the $10,000 2-7 Draw Lowball Championship.

The final table also housed former WSOP bracelet winners Phillip Hui, Brandon Shack-Harris, and the most successful Italian to ever play in a WSOP Max Pescatori.

The Seniors event once again proves that it is one of the fastest growing events of the festival after a record breaking 4,499 entrants created a total prizepool of $4,049,100, beating the previous record of 4,425 set two years ago.

The winner was Johnnie Craig, a former Afghan and Iraqi war veteran who owns a restaurant and a few snow cone stands. The 54-year old was cashing at a WSOP event for only the second time in his career.

Craig’s most experienced opponent at the final table was Roger Sippl. The entrepreneur came into the final table with over $3.5m in live tournaments including $1.3m earned when he finished runner-up to Steve O’Dwyer in the 2015 PokerStars Caribbean Adventure (PCA) $100,000 buy-in Super High Roller. Sippl finished third. Craig beat Jamshid Lofti in heads-up action to win the first prize of $538,204.

And all that means that Jason Mercier has quite a lead at the top of the WSOP Player of the Year (POY) Leaderboard. Mercier has cashed four times, made three final tables, and won two of them, finishing runner-up in between two victories.

Ryan Laplante is in the second spot with eight cashes and a gold bracelet. Ian Johns sits in third with three cashes and two bracelets. Bart Lybaert and John Monnette sit fourth and fifth with 12 cashes between them.

Current Player of the Year Standings