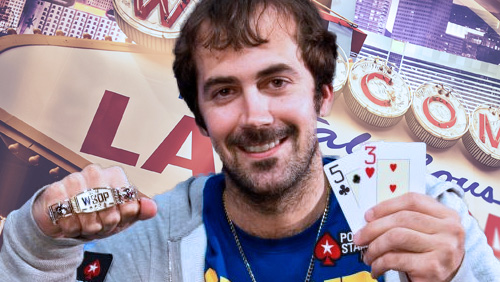 Lee Davy brings you a round-up of all the main action at the 47th Annual World Series of Poker including a second bracelet for Jason Mercier in a week.

Jason Mercier has won his second bracelet of the week in the $10,000 H.O.R.S.E Championship, his fifth of his career, and he did so after suffering the crushing blow of losing heads-up to Ray Dehkharghni in the $10,000 Seven-Card Razz.

It’s quite a remarkable achievement for a man who wrote in his PokerStars blog that he just wanted to go to bed after being denied the opportunity to become the first player to win back-to-back $10,000 World Series of Poker (WSOP) Championship events.

The victory also nets Mercier an undisclosed and sizeable chunk of change from side action. We already know that Fedor Holz lost $200,000 to Mercier after he won his first bracelet, and Mercier himself said there was more money coming his way if he was to win two.

The much-publicised bet between Mercier and Vanessa Selbst that Mercier would win three seems to be off after Selbst declared on Twitter that she had managed to buy out of her bet for a little under $100,000. If you consider that’s a lot of money, and it is, consider she was on course to lose $1.8m had Mercier won three bracelets this summer.

And who would put that past him now?

Korean-born New Yorker, Calvin Lee, has won the bracelet in the $3,000 Six-Handed No-Limit Hold’em event. Lee came into an impromptu fourth day of action 2/5 and managed to walk away with the first prize of $531,577, easily his largest score of his career.

The High Stakes cash game grinder defeated the Costa Rican, Steven Thompson, in heads-up action to win the bracelet. 1,029 players created a total prize pool of $2,809,170. WSOP bracelet winner, Will Givens, went into the final day with a commanding chip lead but finished a disappointing fourth.

Vietnamese-born Danny Le, 49, has won the first Limit-Hold’em tournament of the series and banked $188,815 in the process. Le topped a field of 665 entrants to capture his first bracelet after beating Scott Farnsworth in heads-up action. Incredibly, Farnsworth had entered the event by mistake, believing he had entered a No-Limit game and had to look up the rules before he started Day 1.

Le was cashing in a WSOP event for only the third time and only his ninth cash in all career competitions. Despite his lack of in the money (ITM) experience, Le was making his second WSOP final table appearance. The Californian based pro finished 7th in a $2,500 Limit Hold’em event in 2013.