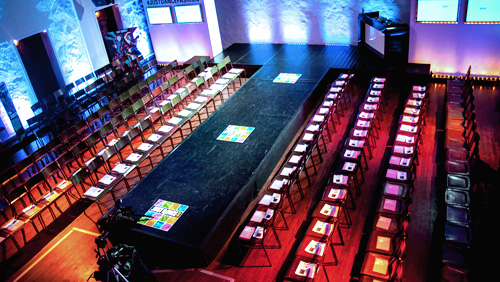 Holland Casino CEO Erwin van Lambaart has agreed to headline the opening session at day 1 (June 7) of next week’s Gaming in Holland Conference.

As the Dutch government recently decided to go ahead with the privatization of the state-owned casino chain (which is expected for 2017), Mr. Van Lambaart’s contribution is not be missed!

An Appeal to Parliament

Because the plenary debate on the Dutch remote gaming bill has been postponed once more, the debate will now take place in week 25 (on June 21, 22, or 23) at the earliest.

It now appears, contrary to earlier assurances, that the postponements, including the latest, were politically motivated, thus depriving nearly one million Dutch players of a safe and regulated online gaming market.

Gaming in Holland invites all participants in our upcoming conference, taking place on June 7-8, to support our appeal to Parliament to finally debate the bill.

Following each session, we will invite speakers and audience members to participate in our call to action. Subsequently, we will present the resulting video compilation to Parliament.

It is time to take action and let ourselves be heard. Join us in Amsterdam!

Due to the latest postponement of the debate on the remote gaming bill, all participants in our June conference will receive a free invitation, once the bill passes the Lower House, to a special remote gaming session taking place this fall.

Although we will still discuss the remote gaming bill with, among others, Marja Appelman (CEO at the Netherlands Gaming Authority) and Dennis van Breemen (Program Manager at the Ministry of Security and Justice), the upcoming privatization of Holland Casino is now high on our agenda.

Apart from the contribution of Holland Casino CEO Erwin van Lambaart, Ron Goudsmit, Honorary President of the European Casino Association and former VP at Holland Casino, and Richard Noble, COO at UK casino Aspers, will both speak at length on this topic as well

There will also be a session dedicated to the future funding of charities and sports in the Netherlands with Peter-Paul de Goeij, MD of Lottovate Netherlands; Anneloes Kokhuis, Marketing Manager at the Royal Dutch Cycling Union; and Esther Roelofs, former Commercial Manager at NOC*NSF.

We will also discuss responsible gaming, including a presentation of the new Bet.ter app.

There will be plenty of opportunities for networking during coffee breaks (offered to you by Playtech) and lunches provided by renowned chef and self-proclaimed “culinary entertainer” Marc Rewinkel.

At night, we will take you on a canal cruise to Jamie Oliver’s FIFTEEN restaurant for a four course dinner with local and international executives and industry insiders.

There are still a few spots open: click here to register.

Due to the current number of attendees at this year’s edition, we decided to move to a bigger location: the characteristic TOBACCO Theater, located directly at one of Amsterdam’s cultural hotspots.