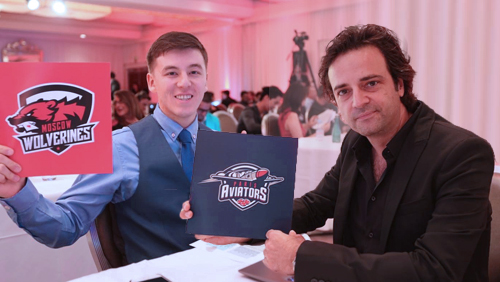 The first trickle of Global Poker League wildcard picks has hit the media airwaves with both Fabrice Soulier of the Paris Aviators and Anatoly Filatov of the Moscow Wolverines announcing their final team lineups.

The first round of matches of the Global Poker League (GPL) are set to take place less than a week away, and we still don’t know what the full team lineups will be.

The excitement leading up the GPL Draft was palpable. It turned out to be a fantastic event. The lapse in announcing the wildcard picks has been a stumble. It was important to keep the foot on the gas after that glorious evening. It’s time for someone to release the handbrake. It needs to keep moving.

Two managers have done that during the past 24hrs, and a trend has started to form. The first Team Manager to announce their wildcard picks was the World Series of Poker (WSOP) bracelet winner, Fabrice Soulier. The Paris Aviators chief selected himself and online cash game star Alex Luneau.

Soulier surprised a lot of people when he decided to add Mike Leah to his stable as his fourth draft pick. Many assumed that he would plumb for his Betclic Everest Group teammate Benjamin Pollak, but it was unlikely that Pollak would be picked up by any other team, leaving him as an easy wildcard selection.

It seems Soulier wasn’t thinking like the rest of us. Despite ranking #2 on the Global Poker Index (GPI) French national charts, he gets overlooked. Instead, Soulier has gone for one of the most exciting online cash game prospects in the game. Alex ‘Alexonmoon’ Luneau, the young man who starred in the poker documentary Nosebleed alongside Seb ‘Seb86′ Sabic is on board.

Soulier then decided to choose himself as his final wildcard, and I’m not surprised by that decision. I expect to see all 12 team managers getting involved in the action. Prior to the wildcard selections, only Bryn Kenney had declared his intention to represent his franchise.

Anatoly Filatov became the second GPL franchise owner to announce his side, and like Soulier, he also decided that he was good enough to get involved when the games start in a few days time.

Filatov’s inclusion left one spot available, and it went to Igor Yaroshevsky. The #1 rated Ukrainian player on the GPI has won close to $1.7m in live tournaments. His highlight reel includes a fourth place finish in the Season XIII WPT LA Poker Classic for $333,680 (interestingly GPL players Anthony Zinno & Mike Leah finished 1-2 in that event); seventh in the EPT11 €10,300 High Roller in Malta for €102,000, a victory in the same event in the EPT Grand Final in Monte Carlo six days later for €218,300, and a runner-up finish to fellow GPL player Kevin MacPhee in a $5,000 buy-in event at the 2015 WSOP for $303,767.

April 5th is D-Day and you can follow all the action live on the GPL Twitch.