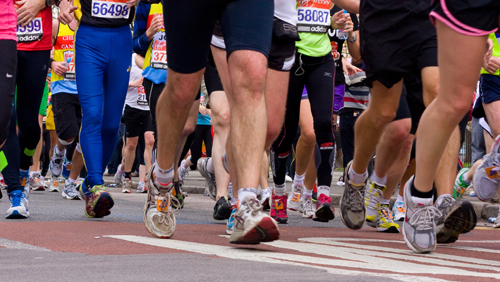 As the industry has matured, iGaming companies have made a name for themselves by supporting numerous charitable endeavors. From sumo wrestling to raise money for responsible gaming to BIG Foundation dinners supporting children’s research hospitals, major industry companies have raised thousands in unique ways. AliQuantum Gaming is continuing this rich tradition by sponsoring one of the industry’s own in his quest to run the “toughest footrace on earth” to raise money for MENCAP, a charity that aims to help those with learning disabilities live life to the fullest.

AliQuantum’s CEO and Founder Andy Jones appreciates philanthropy as much as anyone but he was sure he misunderstood James King, Group Head of Business Development at iGaming Business (part of Clarion Events) when he said he was running 156 miles through the Sahara Desert. “I thought he’d gone mad”, admits Jones on hearing about his friend and colleague’s intent to participate in the Marathon des Sables, a grueling multi-day “ultra marathon” that is the equivalent of running from London to Dover and back again in 120° heat, on sand while carrying a 10kg backpack.

Mr. King remembers it a bit differently. James recalled that “Within hours of launching my fundraising appeal and announcing my participation in the 2017 Marathon Des Sables, Andy got in touch to offer AliQuantum’s support. AliQuatum’s financial support has and will continue to push me both mentally and physically through endless miles of training and inevitably, 156 miles across the Sahara Desert. More importantly, Andy’s and AliQuantum’s generosity will benefit thousands of people with a learning disability to develop skills, gain confidence, and take part in the activities that really interest them. It goes without saying that I offer a huge thank you to Andy on behalf of myself and MENCAP”.

Jones has supported many various charities through AliQuantum Gaming sponsorship, but this opportunity seemed different considering it was an industry mate tackling an unbelievable goal. “We’re very excited to support James during his intense training and through his incredible motivation also support such a worthy cause in MENCAP”. In addition to helping him to his £10,000 donation goal, the corporate sponsorship supports an extreme training schedule that requires participation in multiple marathons and long races in environments not found in England.

Industry colleagues are invited to join Andy Jones and AliQuantum Gaming by supporting James King reach and exceed his goal to raise £10,000 for MENCAP. Read more about MENCAP’s work and support both the charity and James’ “mad” endeavor to run the Marathon des Sables here.