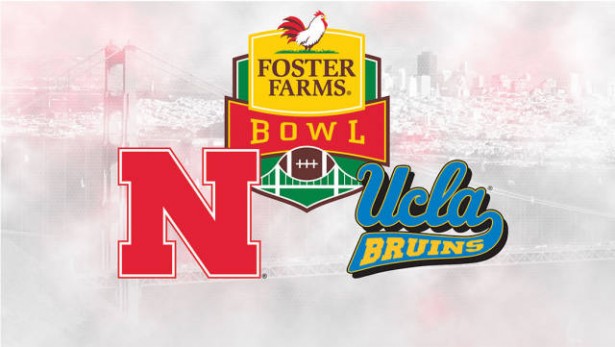 The Nebraska Cornhuskers come into this Foster Farms Bowl with a 5-7 record. Some would say Nebraska should not be in a bowl due to their losing record, but the Cornhuskers played their best football of the season in the 4 weeks, but closed the regular season with a tough 28-20 loss to No. 3 Iowa in Lincoln.

The Nebraska Cornhuskers have been extremely competitive in Coach Mike Riley’s first season. The Cornhuskers’ losses have been by a combined 31 points, with the first five setbacks by a total of 13 points. Their highlight victory was on November 7thh when they beat the Spartans off Michigan State 39 to 38 as a 3 and a half point dog.

The UCLA Bruins are a familiar out of conference opponent for the Cornhuskers, with the Foster Farms Bowl being the 13th all-time meeting between the two Universities, with the series tied at six wins apiece. It will be the first matchup of the schools in a bowl game.

The UCLA Bruins are heads into this holiday Bowl with an 8 and 4 overall record, including a mediocre 5-4 record in the Pac-12 Conference. The Bruins of UCLA rose as high as No. 7 in the Associated Press Poll early in the season. The Bruins have posted victories against 4 teams who were ranked at game time during the 2015 season.

The Bottom Line: This is when you throw out their season records and compare offensive and defensive statistics which are oddly enough similar when you break it all down. In this author’s opinion, Nebraska owns a more consistent offense.