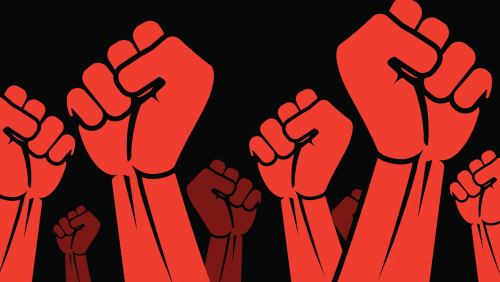 Over a thousand professional poker players plan to host a 72-hour strike, on PokerStars, in protest against the changes to rake and playing conditions in 2016, but will it make a difference?

The trade union guy walks into the office.

The funny thing about trade unionists from the train drivers union ASLEF is they hated driving trains.

They were always in subgroups.

It looked rock hard. It was sturdy; shaped like a shark’s fin.

“It’s unbreakable. The subgroup is trialling them.” Said Bernard.

I couldn’t help wonder how the subgroup would trial these things when none of them drove a train.

“Yeah,” said Bernard handing the phone to the shed driver. “Try and break it.”

“That’s not unbreakable,” Said the shed driver before handing the bits and pieces back to Bernard.

We wanted to give train drivers mobile phones so we could contact them whenever we wanted to. The train drivers were up in arms about it. They liked to go missing. I used to have to send taxi drivers to their homes to drop handwritten notes through their letterbox. They would pretend they never saw them. Now we could send them text messages and have evidence that they received it. It was a brilliant idea.

There was a process. There was a method of doing things. The management would meet with ASLEF and discuss the introduction of mobile phones. Subgroups would be established to see if the equipment would work after being repeatedly stamped on by an insane shed driver. And negotiations would begin to determine what value the drivers would get for agreeing to use the phones. That’s right. In my day, and I doubt anything has changed since, there was very little that management could change about the working life of a train driver without the agreement with the trade union.

I have banged my drum for some time about the need for professional poker players to have a union. I usually receive two responses: laughter at the idiocy of my claims, or a resigned malaise that poker players would never work together as it’s every shark for themselves.

It seems things are changing.

At the time of writing over 1,000 professional poker players are planning to withdraw their funds from PokerStars and refuse to play for a 72 hr period between Dec 1-3, 2015, in anger over PokerStars plans to turn the once profitable fish frenzy into something more fish friendly.

Here are seven lessons I learned from my railway days that may prove to be points of interest in the future struggles between players and management of the world’s largest online poker room.

Strike action comes about after one side fails to engage in negotiations. It’s a back to the wall mentality and not one taken lightly.

The problem an army of individual poker players has, is there has been zero negotiation. Consultation needs to come before strike action. There has been no negotiation because when Amaya Gaming looks out into the world they see nobody with which to negotiate.

Until a players union is formed and recognised by Amaya, they will be able to change anything they want whenever they want. You will continue to get lip service via 2+2, with some ‘suggested changes for improvement, please supply feedback’ laced here and there, but the bigger changes will go ahead without your input.

All great trade union movements have great teams of leaders. Each union has a chairperson. This person is the head of the council. He or she earned the seat via a voting mechanism. People vote based on the skills and experience of the negotiator.

What happens in poker, when there is no such system?

He or she who shouts loudest becomes the spokesperson?

Is this a solid idea?

3# What is Your Leverage?

I remember when the RMT went on strike during my time on the railway. They were the main union body for the shunters. Our CEO trained every manager and clerk to shunt trains. They went on strike; the managers and clerks shunted the trains, and there were minimal disruption and a significant saving made on payroll costs during that period.

They had no leverage.

When ASLEF threatened to strike management stopped what they were doing and made sure, they sat around that table. Safety laws made it tough for managers and clerical workers to drive trains. If the train drivers went on strike, the business would grind to a halt.

What leverage do the poker players have?

Will they be able to make Amaya want to sit around the table?

Will their business grind to a halt?

The might of the coal miners and their strike action during the Maggie Thatcher years is legendary. I lived in the South Wales valleys for years. During those times, the children were sent off to live with relatives for months on end because there was no money coming into the house.

There was a steeliness about them. They did not cross the picket line. They would not become scabs. There is no picket line in the online world. There is no visibility. The attempts to boycott the Venetian card room showed that it’s not an easy thing to get poker players to work together on an ad-hoc basis.

It will be like a flea bite to the power of Stars.

How important are the professional poker players to Amaya?

Like I said under ‘leverage‘ during my time in the rail industry the drivers were vital, and the shunters weren’t. One was irreplaceable, and the other replaceable.

Where do you think professional poker players lie on that barometer?

6# It Could Get Worse

When you take strike action, you give management the opportunity to learn what it is like to operate a business in your absence.  When the shunters went on strike and managers took their positions, they were able to see first hand where they could make further cuts. It was a disaster for the RMT. They went on strike, and lost money; the railway continued to run, and not only did management save payroll costs, they learned how to cut even more costs going forward, so much so that people who went on strike returned to a world of limited positions.

Amaya will use these 72 hrs as an experiment. The professional poker players had better hope they don’t like the results, or further cuts could be on their way.

7# Showing Your Hand Too Early

The one key point I took away from my trade union days was a lack of trust destroys relationships for years. The trust that existed when I worked there was fake. There were layers upon layers of moves. They became so thick you didn’t know what was right from what was wrong.

It was obvious to me that the only way forward was for management to create an authentic relationship with the trade union, and for the two factions to work together to create a win-win solution that moved the company on.

The poker players have shown their hand too early. By choosing to demonstrate via a walk out, instead of doing a Vicky Coren and just quitting over principle, they are proving to PokerStars that they need them a lot more than they are needed.

Strike action will result in communication with Amaya.

They won’t ignore this; that’s dreadful for business. But until the professional players unite in a professional organization to handle these matters in a more thought out way, so that negotiation comes before action, then Amaya will always place you underneath their shoe and smash you to smithereens.