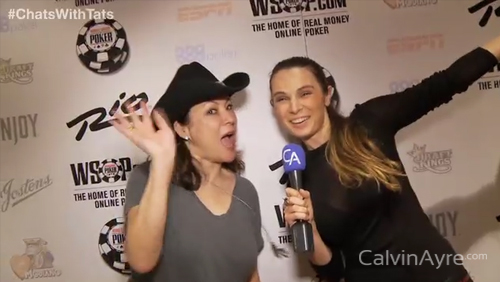 Forget an honorary Oscar, give Jennifer Tilly a World Series of Poker bracelet.

The 57-year-old actress and poker player said she’d rather take home a main event bracelet than an honorary acting award given “for living long enough.”

The actress has been in the poker industry for quite some time. In 2005, Tilly won a WSOP bracelet after beating 600 players in the Ladies’ No-Limit Texas Hold ‘Em event. Several months later, she took home the top prize at the third World Poker Tour Ladies Invitational Tournament in Los Angeles.

Tilly, however, admitted that things are a little grim in the poker world these days.

“When I stated playing, it seemed like there were a lot more recreational players. I started in 2005… I think there was a lot more optimism, like everybody was like supernova, everybody was winning and traveling around and pulling great wads of money out of their pockets, and now it seems like it’s a little more grim. It’s not so much of a really fun roller coaster ride,” she noted. “I think that the players are a lot smarter. I mean, it’s really easy to get educated. There’s a lot of great online poker websites and the livestreams, too. Everybody can see how the pros play… so I think it’s harder to win these days, but it’s still [a] fabulous game.”

So Tilly is turning not to her partner, Phil Laak, but to Brian Rast, who recently won the Super High Roller Ball, for tips to improve her game.

“Well, number 1, Phil will not discuss poker with me because we just get into arguments,” the actress said. “I don’t really discuss with Phil and all his poker player friends. They’re all really smart and they have this thing like it’s not cool to talk about poker, so basically with poker, I’m sort of reduced to talking to people who stopped me in the hall and to tell me their stories, so then I’m like, ‘Let’s listen to yours, now you have to listen to mine,’ but all the really smart players that I know, they don’t really talk about poker.”