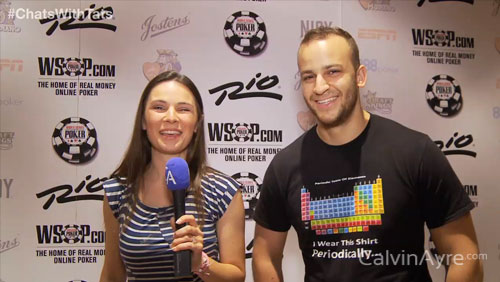 In this episode of Chats with Tats, Sorel Mizzi tells CalvinAyre.com’s Tatjana Pasalic how he plans to take a step back from playing in order to put a balance between his poker life and private life.

After playing poker for many, many years, Sorel Mizzi—one of the best tournament players in the world—is now all about finding the right balance between his professional and private lives.

For the past year, Mizzi said he still played a lot of events, but the number is comparatively lower than his previous runs.

“I sort of actually played the least events I’ve ever played during the World Series,” Mizzi told CalvinAyre.com. “I decided that this year is gonna be all about playing when I’m in the right state, when I feel like I can play my best.”

The 29-year-old poker pro, who was named the Bluff Player of the Year and the PTPR Tournament Poker Player of Year in 2010, admitted that he has reached the point where he felt he was burning out.

“I think you kinda get into that whole stage a lot easier when you’re losing, but then the paradoxical problem is when you have, like, a big win, then you think, ‘Oh, poker is amazing again,’ so it’s like it’s had to get out of that grind,” Mizzi explained.

For now, Mizzi’s plan is to take a step back from poker, even for just a little bit, to focus on other things.

“It’s becoming more and more obvious that the idea of forever playing poker is wishful thinking and that’s something I’ve kind of been cognizant of, so after this summer, I’m gonna focus on some different stuff. [I’ll] still play poker but not as frequently,” he said.

Mizzi said he wants to achieve a lifestyle conducive to happiness in the next decade.