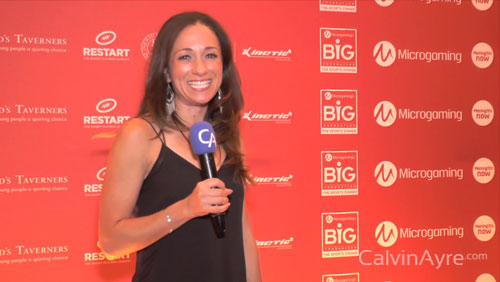 Guests arrived at 7:30pm in black tie attire, greeted by Playboy Bunnies and champagne as they arrived at the venue. After an hour of mingling and champagne sipping, guests were invited into the ballroom and welcomed by Richard Hogg, one of the BiG Foundation founders.

Next up was Austin Healey, MC for the evening and back by popular demand after his stellar performance on stage at the 2014 BiG Dinner. Healy delivered a light-hearted, humorous speech, reminiscing about his rugby days and poking a little playful fun at the iGaming industry.

After speeches, guests were treated to a three course dinner and enjoyed a performance on stage by Chris Kamara, Sky Sports “Soccer Saturday” star and English former professional footballer.

Following Kamara, to raise some money for charity, ten horses were auctioned off to the crowd and British sports pundit Angus Loughran got up on stage to lead the race commentary. The winner was table seven’s horse number four with the winnings going straight back to charity.

Before heading to the Playboy Club for an official after party, the BiG Foundation’s raffle closed out the dinner and awarded 14 lucky winners with prizes such as a 1 year membership to The Fox Club, an Upper Street Bespoke Shoe Voucher, two season tickets to Esher RFC, a day at the races at Sandown park and more.

At the conclusion of the dinner, Healey confirmed the crowd “raised a huge amount for charity”, the best indicator that the 2015 BiG Sports Dinner was a success.