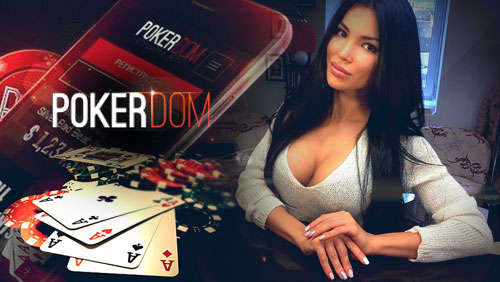 Russian online poker site Pokerdom are offering their players the opportunity to play Strip Poker with models Svetlana Bilyalova, Aleksandra Markina, and Aiza Dolmatova in a bid to attract more players to the site.

The Russian-facing online poker site has decided to host a series of Strip Poker type contests. Before Russian players get concerned that they will have to get their kit off, there is a catch. Only three people will be taking off any clothes. All three are beautiful models. All three will be wearing very little clothing to begin with.

Players will partake in a series of satellite qualifiers, from which eight players will emerge to participate in three Strip Poker finals. All satellites are freerolls and it seems the only point of the game is to get the model to strip down to her birthday suit.

The three models in question are Svetlana Bilyalova, Aleksandra Markina, and Aiza Dolmatova. And these are popular girls. Moscow based Bilyalova has 2.1 million based Instagram followers, Markina has 800,000 followers, and Dolmatova has 675,000 followers.

The rules are quite simple. Each time one of the models loses a stack they remove an item of clothing. Each model is allowed two rebuys during the game. Players will be hoping that they won’t be playing in a garden somewhere in Siberia.

Pokerdom is a relatively new outfit and currently has one professional team member in their ranks Anatoly Filatov has earned over $1.2 million in live tournament earnings including a victory worth $201,986 in last season’s High Roller at the World Poker Tour (WPT) stop in Cyprus.

He is also one of the sharpest suited poker men in the business. Filatov looks so fine he makes Tony Dunst look like a hobo. It’s unknown at this time whether the ladies will get to see Filatov showing his Fillet-O-Fish, in the aforementioned Strip Poker game, although for reasons of sexual equality I think it must surely happen.