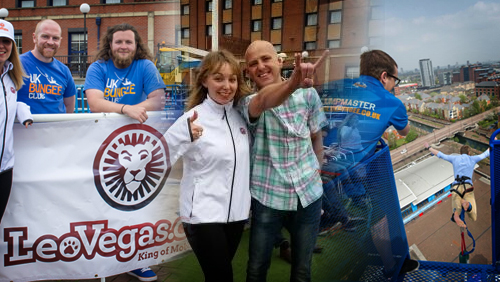 Steve Thorn has been crowned the bravest man in Britain after jumping his way to victory at Salford Quays, Manchester.

38 year-old Steve was one of 60 brave Apple fans who bungee jumped for their chance to win the recently released Apple Watch. Participant’s heart rates were monitored and Steve, an electrician from Dagenham, stayed the calmest throughout the 160 foot descent with an average heart-rate of just 72 beats per minute.

Steve said: “We were in Manchester to watch Paddy McGuinness’ new show but it was postponed so we were looking for something to do while we waited when we came across the bungee competition.
“I’m terrified of heights and one of my biggest fears is falling but I thought I’d give it a go anyway. I didn’t expect to win so was totally shocked to hear I stayed so calm.
“I’ve never done anything like this before but now I feel like I’ve got the confidence I need to take on a sky-dive next! I’m over the moon to have won. I’ve conquered my fears and won an Apple Watch – it was an amazing experience.”

The event was organised by mobile casino LeoVegas.com to celebrate the launch of the Apple Watch.

Shenaly Amin, UK country manager at LeoVegas.com, says: “We pride ourselves at being at the forefront of mobile technology and wanted to run the event to show our support for the launch of the Apple Watch. The atmosphere on the day was unbelievable and the excitement in the air made the event a resounding success. It was amazing to see how brave people were and that they were all still smiling when they got their feet back on the ground.

“Steve surprised himself with his bravery and we are pleased to be giving the prize to such a deserving winner.”