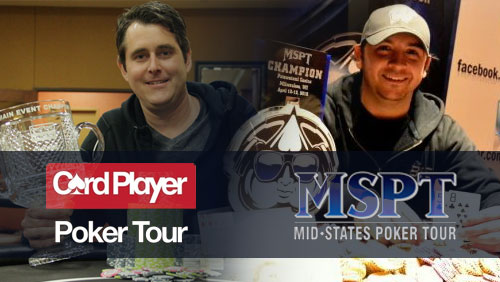 Multiple World Series of Poker gold ring winner Chan Pelton puts his World Series ban behind him to pick up the win at the Card Player Poker Tour Main Event in Choctaw, and Jason Mirza takes down the Mid-States Poker Tour in Potawatomi.

It was a little over a year ago that Chan Pelton went from hero to zero, after being found guilty of removing a T25, 000 chip from his stack, when heads-up for his third World Series of Poker Circuit (WSOPC) gold ring, in a side event at the WSOPC stop at the Palm Beach Kennel Club (PBKC).

It was an act that would prove very costly to Pelton. He would go on to win that event, but both the WSOP and PBKC came down heavy on the young man. His victory was revoked, his seat at the WSOP National Championships removed, his prize money handed to someone else, and worse of all, he was banned from the PBKC and all Caesars properties indefinitely.

With the WSOPC beyond his reach, Pelton continued to earn a living playing on the Card Player Poker Tour (CPPT). He has cashed in eight events, since being found guilty of that rule breach, including six final tables and a solitary victory in the recent event at Choctaw, Durant.

The Texan pro defeated a field of 656 players on his way to a career high score of $130,455. Quite remarkably, the 2014 CPPT Choctaw winner, and runner-up, also made the final table. Former champ Austin Lewis busted in fifth, and the former runner-up Gary Luther did likewise in seventh.

Pelton beat Andrew Watson, in heads-up action, after flopping a straight on [7c] [6s] [3s], top finish off a duel he started as the considerable chip leader.

Jason Mirza has topped the largest live tournament field in Wisconsin’s history, after topping a field of 635 entrants on his way to winning the Mid-States Poker Tour (MSPT) Main Event at the Potawatomi Casino in Milwaukee.

Mirza was handed $147,529 for his win. Not bad, when you consider his previous best score was $5,342 way back in the summer of 2013. It was the largest-ever MSPT event to be held outside of Las Vegas.

The Fitchburg native entered the heads-up phase with a slight chip deficit against the experienced Leon Morford. The former Heartland Poker Tour (HPT) champion was keen to add a MSPT title to his CV, after coming second in their event in Gary in March of last year, but it wasn’t to be as Mirza took the chip lead before ending the tie flopping two pair versus the top pair of Morford.

“Just shipped the MSPT Potawatomi for $147k, “ Mirza tweeted to his friends and family after his win, “Finally a big result after a ton of work. Tyty all for the rail.”

The win puts Mirza into second place on the MSPT Player of the Year board; 440 points behind the current leader Mark Hodge, who has cashed in four events so far this year.