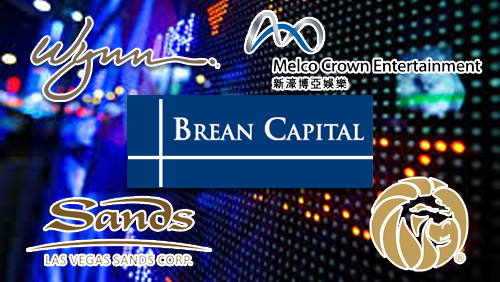 Macau stocks jumped yesterday in response to a Brean Capital Buy rating for four casinos in particular: Wynn, Las Vegas Sands, Melco Crown, and MGM. In response to the coverage, all four stocks jumped. Wynn in particular traded in a huge 7% range yesterday. But by the end of the day, 3 out of 4 of the stocks were down, with the exception of Wynn.

Bryan Maher is the Brean analyst who wrote the report, and he is being called contrarian here, as most Wall Street firms remain bearish on Macau. While I am certainly not bullish, Maher’s reasoning is not entirely without merit.

First I will say that in general, free advice given by Wall Street firms is not something I generally pay much attention to. What a firm publishes for public consumption versus what it tells or does for its paying clients is sometimes very different. In some cases a firm may publicize what it actually thinks in order to better its reputation and go on a client hunt. Oftentimes though, a firm may publicize the opposite of what it thinks in order to sell into strength or buy into weakness and so benefit its existing clients.

There are two ways to investigate what is going on with any given call using publicly available information. The first is to look into money flows a month or so before and after a given rating. Selling on Strength and Buying on Weakness numbers are available every day at the Wall Street Journal with archived data. If you have the time and inclination to set up large spreadsheets spanning a two-month timeframe and go on a hunt for Wynn, LVS, Melco, or MGM, then by all means. Nothing showed up on either side for any of the four stocks yesterday, for what it’s worth. Second, you can look into any form 3, 4, 13D or 13G filed with the SEC surrounding any call. Any large stake 10% or more requires a 3 or 4, and anything between 5% and 10% requires a 13D or 13G. Obviously, if you see any of these forms filed by any Wall Street firm either confirming or contradicting a public call, you know what’s really going on. As Jim Rogers says, 99% of investors don’t take the time to find these things because it’s a tedious job, and worse, it’s all archived by government websites which are pretty horrible. Not to mention the fact that a firm can always acquire less than the reporting threshold anyway.

Taking Brean’s calls at face value then, let’s go through Maher’s targets one by one:

Just in terms of pure technicals, Wynn is due for a short term bounce. 50-day RSI is at levels not seen since the 2008 financial crisis, and there have been two sharp waterfall declines since December. However, I see nothing fundamentally driving Wynn higher by the second half of 2015, especially since the Wynn Palace opening was delayed until at least after the Chinese New Year in 2016 due to building permit issues.

The broader issue is that China’s stock market in general is brushing multiyear highs while macroeconomic indicators continue to disappoint, including the manufacturing index (PMI) and employment, coupled with a continuing Chinese housing market collapse. These are serious beta headwinds that Wynn will have to overcome along with all Chinese, or Chinese-affected equities.

Nevertheless, China’s crackdown on so-called money laundering has its limits, and expectations have been lowered. Brean’s call may catalyze some sort of 1 to 2-month jump, but not as high as $174 and most probably not long term. If you remain short Wynn, hedging against a short term bump with a 3 month time frame may be prudent here. June 19th calls are availabe for this.

This call seems more possible, but I’d bring it down to $60. The St. Regis Macau Hotel is scheduled to open August 1, which will turn capital expenditure into revenue. That, and success in Singapore will insulate the stock somewhat. The Marina Bay Sands is actually LVS’s third largest resort by revenue generation, second largest by growth at 9% in 2014, and will probably come in first next year in terms of growth. While I would not suggest going long here due to lack of an overly compelling case coupled with financial instabilities all over the place that could start a domino effect any day, if you’re currently short, a small 3 to 6 month hedge couldn’t hurt here either.

MGM is the most weighted towards Las Vegas of all these companies, and the US is in the boom phase of the business cycle for now, with money supply growth really taking offand bordering on $12T, with no signs of slowing down yet. MGM is OK to go long, but with a lower target of $24, and advisable to only go long on down days. The stock is up 15% in two weeks so it needs a short term breather, but scaling in on down days is not a crazy idea. While MGM is invested in Macau, MGM China is only 51% owned by MGM Resorts International, so negative news out of Macau is somewhat insulated. MGM is a US boom phase play, and as expectations of Macau are already quite depressed, the stock may perform well in the medium term.

Melco’s stock is in a similar situation to Wynn in terms of technicals. RSI is extremely depressed to 2008 collapse levels, leaving plenty of technical room for a bounce. Adding to that is the grand opening in February of the City of Dreams Manila, which will translate into revenues for Melco in the coming quarters as per Brean’s reasoning. A $31 price target is possible within a year if the jerrybuilt global financial superstructure of the planet continues to survive for that long. It’s safe to go long here, with your finger on the trigger at any sign of a global financial meltdown.

4)  MPEL – safe to go long now, but watch out for any signs of systemic infection in the financial sector.

5)  Overall, don’t wait for Brean’s targets to materialize. Cutting them by 50% from current prices would be the conservative choice.

Brean Isn’t Doing So Well After Its Bullish Macau Call
Rafi Farber
12 May 2015
.