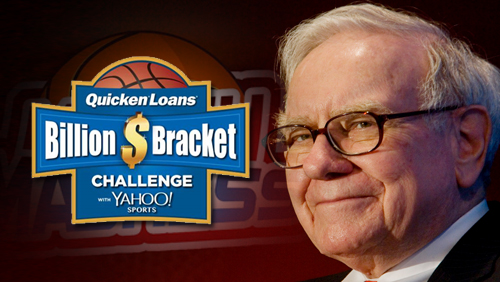 If you had plans of winning Warren Buffet’s $1 billion March Madness bracket challenge this year, your odds just went down from highly improbable to, well, impossible.

According to CNN Money, the parties involved in making the challenge last year—Buffet’s Berkshire-Hathaway, Quicken Loans, and Yahoo!—are now embroiled in several legal disputes stemming from disagreements on who came up with the idea in the first place.

Apparently, all the trouble started when a small sweepstakes company called SCA Promotions took Yahoo to task, suing the Internet company for allegedly reneging on a deal to host a perfect bracket contest. Not to be outdone, Yahoo filed its own lawsuit, alleging that SCA communicated to Berkshire about buying insurance to cover the $1 billion price in the unlikely event that somebody somehow defied the odds and won the contest.

The problems continued to fester up until February when Yahoo sent subpoenas to Berkshire, asking the latter to provide any information on whether it had any business dealings with SCA Promotions, including any communication between Buffet’s company and SCA regarding the contest. Turns out, that subpoena didn’t sit too well with Berkshire, who asked a judge to throw it out on the grounds that it was “overboard” and “unduly burdensome.”

Meanwhile, Quicken has already announced its plan to offer something different this year. Company spokesperson Aaron Emerson said that the company plans to offer “something new and innovative that will carry on our heritage of launching unexpected and engaging events that will take the nation by storm again.”

Emerson closed his statement by telling everyone to “stay tuned.” One thing is clear, though; it won’t involve winning anything close to $1 billion.