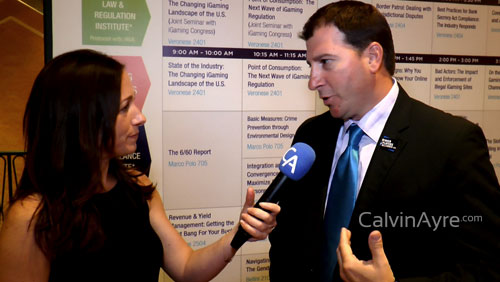 Becky Liggero talks John Pappas of Poker Players Alliance as he shares what he learned at the G2E iGaming Congress and gave an update on federal online poker legislation.

Becky Liggero: I am here with John Pappas, executive director of Poker Players Alliance (PPA).This is the day of iGaming Congress. So, John, tell what have you observed today so far in the Congress. What have you learned?

John Pappas: Well it’s always great to be here as a kind of a representative of the player community. I think it is important that we have a presence here and have a voice here to interact with the companies in iGaming space and this is really the biggest gathering of iGaming companies. One of the biggest gathering of the iGaming companies in the United States. So it is important that we’re here. the panels have been excellent talking about everything from importance of knowing your customer and the trials and tribulations that players have to be able to deposit money to the site and all that goes into it is something i thought was very valuable to listen to and follow up to those people that run the panel. A lot of what happens here, happens outside of the panel, in the hallways here in the discussions that you have and how often is it that i gotta sit and talk with New Jersey regulators and California regulators alongside with heads of poker room for bwin and or for Partypoker or for PokerStars. So this is a great place for us to be. to be able to have the perspective of the players.

Becky Liggero: We know that regulations here in America for online gambling is obviously a big topic. What do you think is what were going to see in 2015 for new states jumping on board.

John Pappas: a few states that jumped out to everybody and that’s Pennsylvania and California are the two that are on the tip of my tongue, take New York will be on the shortlist as well as Illinois. You know it’s a struggle. It’s a long, slow process here in the US. And quite frankly, what I’ve always seen is it usually takes few legislative sessions for something like this. So in California, we’ve had multiple legislative sessions plus we have tribal issue that’s overhanging everything. In Pennsylvania, we had some bills introduce last year, some hearings and discussions. I think we’ve passed critical hurtle allowed one legislative to go by and now i think in 2015, we’re gonna see more bills to be introduced, more hearings and i believe there will be some votes in Pennsylvania on legislation. Which way they go right now is hard for me to say. I’m leaning to Pennsylvania state to legalize internet poker and internet gaming broadly.

Becky Liggero: I remember in the past we’re always pushing for Federal online poker. Can you give us an update on what’s happening on a federal perspective.

John Pappas: Federal bill is something i think everybody in the conference would support because of the harmonizing of multiple states. the idea of 50 different states, 50 different regulatory regimes is still very problematic for the industry, very problematic for the players but that’s what we have because we have congress that’s unlikely to pass a bill that’s licensing and regulating internet gaming nationwide. Given that, we still have a congress that could do something very bad.We’re standing here at Sands Expo and the owner of this casino is also one of the biggest opponent of online gambling. He’s been spending a lot of money in the upcoming election to ensure that he gets people in congress to support his issues. Maybe some all sort of things but internet gaming being one of them.That’s a real threat. I would put it probably below 20% right now that i’ts going to happen. That’s too high of a risk for us to just kind of sitting back and hope that it does not happen. We’re gonna be very engaged over next several months to make sure on a Federal level they do no harm. I don’t think they can do any good for us and at the minimum they can do any harm.

Becky Liggero: It’s ironic that we’re standing here in Sands property and we have an iGaming congress going on.