Additional bout announce for ONE FC : Age of Champions 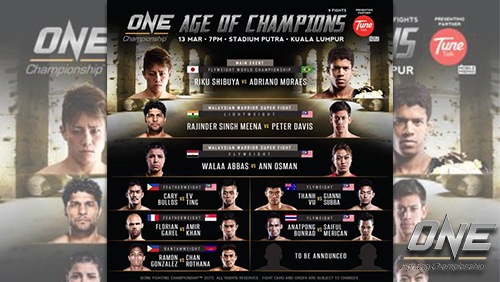 Amir Khan is a Singaporean mixed martial artist with an undefeated amateur record who has competed in the United States. He is a Brazilian Jiu-Jitsu Blue Belt under Relson Gracie, and also has competitive wrestling and Muay Thai experience. With more than seven years of combat sports experience under his belt, Khan now faces Florian Garel after being victorious in his first two ONE FC bouts.

Originally from France, Florian Garel trains out of Taiwan Top Team and has made Taiwan his second home. Garel studied the Chinese language while in university and moved to Taiwan to marry his Taiwanese wife. A 4th Dan Karate black belt, Garel eventually settled in Taichung where he now teaches martial arts.

Walaa Abbas is a national Egyptian kickboxing champion who has notched a 2-2 record so far as a professional mixed martial artist. She boasts of exceptional striking prowess and always looks to finish fights early. Abbas will be taking on Malaysia’s warrior belle, Ann “Athena” Osman after replacing Osman’s original opponent, Angela Lee.