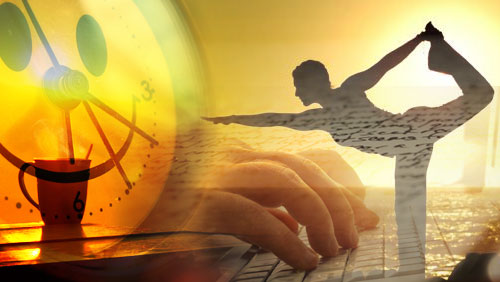 Lee Davy explains how his revised morning schedule has paid dividends in both his personal and working life.

One of my most common gratitude statements:

“I am grateful that I have the freedom to wake up when I want. That I get to choose the structure of my day, and not have it determined by someone else.”

I left school when I was 16-years old and within six months I was working for British Rail. I left 19-years later. In that period of time I never had the freedom to wake when I wanted – weekend excepted. This was true even when I had reached a senior position.

It’s incredibly liberating it is to be in control of your own working hours. It’s become so important to me, I doubt I will ever work for anyone, other than myself, ever again.

This didn’t happen by accident. I asked for it. I closed my eyes and asked the universe to give me a job where I was the master of my own hours. She delivered. She always does.

I was sleeping at 4am and waking at 10am. I read that you needed eight hours of sleep, otherwise you wouldn’t function at 100%, and your brain would deteriorate. I also read how Holocaust survivor, and Logotherapy creator, Viktor Frankl, survived through that horrific time on sleep fumes.

Then one day I was reading a blog post from an online entrepreneur called Pat Flynn. He was recommending five books that he had read twice during 2014. I bought all five and the first one I read was The Miracle Morning by Hal Elrod.

I decided to eat this one first because I could feel my levels of creativity were waning as the evening wore on. I would wake at 10am, go through my morning routine, and was ready to start writing at around noon. Then by five or six I would lose it. I wasn’t tired. I had lost my appetite. The lights were on but there was no one at home. My creativity would return at midnight, and I would write until 2am before ending with a movie.

Could a morning start be the thing I needed to maintain longer levels of creativity?

It was a great book. One I urge you all to buy. It tells a tale of how Elrod changed his life by getting up early, and creating a life of habit and structure. My ego had a little rub because I was doing most of the things that Elrod suggested. Only I was starting four hours later than him.

I always manage to pull a piece of gold from most books I read and this was no exception. Elrod said that he had carried out numerous experiments with regards to how lively he felt the morning after various lengths of sleep. He experimented with nap times ranging between 4-14 hours long and guess what he established?

I set my alarm clock to 6am, told myself that I was going to wake up full of the joys of spring, closed my eyes and struggled like mad. I must have fallen asleep around 3am, but when I woke at 6am I felt magnificent.

This is what I have been doing for the past month.

I wake up at 6am irrespective of the time I go to sleep. This is generally between midnight and 1am. I roll out of bed as soon as the alarm goes off. This is to prevent the conversation you will have with yourself. The one that will tell you to go back to sleep.

I have my running gear ready, and so I brush my teeth, down a pint of water, get my running gear on and out I go. I run two miles per day. For several weeks I have decided to extend this by one mile every Saturday. Last Saturday I ran seven miles in 62-minutes. It’s the longest I have run in the 40-years I have been on this planet. My goal is to run to my son’s house and back – that’s 60-miles.

When I get home I strip down to my undies, have a warm glass of lemon water with cayenne pepper, and practice yoga. I am currently following a 30-day program and each session ranges between 10-30 minutes per session.

As soon as the yoga ends, I practice my headstand. I have that one pretty licked now. Then I go to the bathroom and set the timer on my phone. I jump into a hot shower for a minute, and then turn it as cold as it gets. I spend five minutes under the cold water. To block out the pain (and there is plenty of that) I recite my daily affirmations and visualizations of my future. Interestingly, the cold creates amnesia, and I sometimes forget my lines. I’ll explain why I have a five-minute cold shower another time.

After the five minutes is up I have a hot shower and then dress. I go back into the living room and I practice Transcendental Meditation for 20-minutes. When I open my eyes there are some more affirmations that I speak out aloud. I thank the universe, I say my gratitude prayers and send out a few blessings to those I think need it. Today, I asked the universe to give my parents the strength to continue not to smoke, and to give my sister and her partner strength to get through a particularly difficult time.

I put my headphones on and listen to the autobiography of the moment. Yesterday it was Gandhi. Today it’s Richard Branson. I make a green juice for my wife and I. Then I make eggs and vegetables for breakfast (that changes as today I have decided to become vegan). Next I write in my journal. Any old shit really, but I make sure I fill a page. I also make a note of anything that I have learned in the past 24-hours.

By the time my ritual ends it’s 9am.

Then I start writing.

I choose the most difficult writing assignment that I have and I begin with that first. It could be difficult because I don’t like the subject matter, it needs my full creative attention, or it could be a 2,000-word monster. It was Brian Tracey’s 21 Ways to Eat a Frog that taught me the value of downing the most ugly task first.

The results have been outstanding.

I’m not going to lie. I feel tired as the day wears on and that never happened when I slept from 4am – 10am, but I think part of the reason is because I am squeezing so much more into my day. I am so organized; so battle-hardened, and prepared for anything.

I also believe my work has improved as a result of the shift in time. I feel it when I write. There is more passion, more intensity, and most importantly more creativity. Writing has become fun again. The moment ‘work’ becomes a drag, it’s time to get a new form of ‘work.’

I realize that my morning routine takes three hours. Not everyone has the luxury of time like I do. But you can easily cut this down by 50% by shortening everything I do by half. Take a one mile run, do 10-minutes of yoga, do 10-minutes of meditation and skip the cold showers because they sound sadistic.

Quantity is not important. Taking control is. You can’t control the morning wood. You wake up and there it is. But you can control your morning. And trust me. It will be a game changer for you.

PS: The cold shower takes care of the morning wood.

Citizenship in a poker republic, a salute to the men & women in the arena
Lee Davy
1 July 2019