Home / Business / Exit before the Grexit 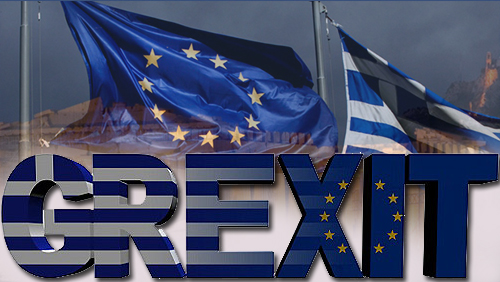 It’s time to get out of European gaming stocks, at least for now.

Something is happening in Greece, a wild card that almost nobody understands. Very rarely in history do these things happen, but political mainstreamers don’t see it coming. They are blinded to it, because they are so neck-deep in the muck of the system itself that they can’t see outside of it.

Here I am not referring to SYRIZA, Greece’s new ruling party, per se (whose leader Alexist Tsipras hates “large gambling interests and profiteering rampages”). SYRIZA is the new radical left wing party that just won 149 seats out of 300 in the Hellenic Parliament to renegotiate the Greek bailout. SYRIZA and Tsipras are just like the others, never saying anything of substance besides a few catchphrases, never being specific, never making any sense. Alexis Tripras is a red herring.

In a nutshell, it’s like this. If just another politician occupied the Greek FinMin seat, eventually he’d be bought off by the Troika, that trifecta of acronyms like ESM and EFSF that hold all the bailout funds, and the proverbial can would be kicked down the road again. But Varoufakis is not just another politician, and that’s what political mainstreamers, as well as Eurozone leaders themselves, just don’t understand. He’s serious. He wants to default, he’s been saying it for years, and he is the only one with the guts and independence to mean what he says and do it.

Before I get into the seriousness of Varoufakis, the relevant advice is to get out of all European gaming stocks over the next week, maximum two weeks. Sell into upticks and go to cash, not all at once if you have heavy positions, but start zeroing out your holdings. Bwin.party has been trending up over 30% since its bottom in August. Ladbrokes is up 6.5% since the start of the year. William Hill is up close to 5%. Paddy Power is up 30% over the last 6 months. Betfair is in a continuing monster uptrend. Regardless of where you entered, if you’re up or down, all these stocks are in some kind of uptrend, whether short term or longer term. There is about to be at least a countertrend dip in the best case scenario, regardless of fundamentals.

To understand what Varoufakis wants to do, I encourage you to listen to this interview he had back in 2012, before he was ever on the political scene. Also take note of the way he talks. It is not politician-talk. He does not want any more bailouts, he has said he will not accept any more Troika funds, and he actually carries his resignation letter in his inside pocket. In his words, from his blog:

My greatest fear, now that I have tossed my hat in the ring, is that I may turn into a politician. As an antidote to that virus I intend to write my resignation letter and keep it in my inside pocket, ready to submit it the moment I sense signs of losing the commitment to speak truth to power.

At some point in the next few weeks/months, Greece is going to default, depending on how many short term extensions it gets to its February 28th deadline, if any. The rumors of a Greek default are already causing a rush to safety among European investors. Money is already flowing out of stocks and into German bunds. As for an actual Greek default, it will cause panic selling, which you don’t want to be part of. Sell when you can, not when you have to.

There is a good scenario and a bad one. Here is the bad one. Eurozone leaders and Varoufakis play chicken. Varoufakis doesn’t blink, the Troika doesn’t blink either, and Greece defaults entirely. Then Tripras, the new Greek Prime Minister, who unlike Varoufakis is a politician, funs out of Euros and starts printing Drachmas to fund his promises, which will quickly hyperinflate. From there, the entire Eurozone will be in danger of collapse, all the while economic activity will be seriously disrupted.

Here is the good one. Varoufakis and the Troika come to an understanding. Greece renegotiates its debt for a large, say 50% haircut, which will make its debt serviceable. If the Troika and Greece reach that kind of deal, you can buy back all your positions. For now, things are going to get dicey while Varoufakis battles it out in a game of bond chicken with Eurozone leaders.

As for Greece’s gambling industry itself, it does not look good at all. Tsipras is no friend to people doing business, not the least casinos. Writes CalvinAyre’s Steven Stadbrooke:

A politician, who makes his money off of taxing businesses, who wants to expand the budget of a bankrupt institution and gamble on the conequences, talking about “profiteering rampages” of gambling interests that he has to stop. The gall just never ends.