Home / Poker / Bull Poker Player Hospitalized After Getting the Horn 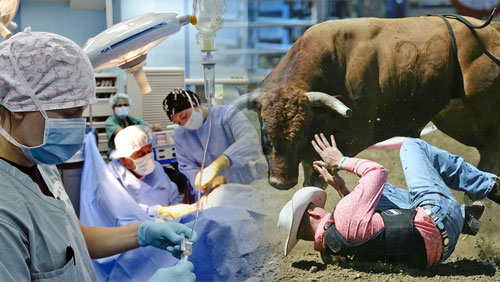 A young man spends four hours in surgery after being repeatedly attacked by a bull during a game of Bull Poker in Portland Oregon.

Griffin Benger has just won a million dollars in the inaugural television production of the PokerStars Shark Cage. If you didn’t watch the show, contestants suffered the ignominy of spending an orbit in a cage (that didn’t even have a door) depending on the result of a river bluff.

It’s about as hard as Julian Clary.

More like a goldfish bowl than a shark cage really.

The feedback from the general public has been mixed, so perhaps PokerStars need to spice things up a little for the second iteration, and what better way of doing so than taking heed of what’s going on in the world of rodeo right now.

Austin Bottcher has just spent New Year’s Day having his leg pieced back together after being savaged by a bull during a game of Bull Poker. Let me fill you in. A bunch of crazy-ass cowboys play a game of poker in the middle of an arena whilst a very angry bull tries to gore the hell out of them. The winner is the last player seated.

In this particular game of Bull Poker they added a twist by piercing a joker through the horns of the bull. If a player could retrieve the joker they would win the contest. Just to be safe, each player had to sign a waiver declaring that the rodeo would not be found negligible should the player be eaten alive by the bull. Bottcher thought it would be a good idea to try and get the joker. He doesn’t think that anymore.

“I don’t regret doing it, but I don’t think I will be back up there playing Bull Poker again.” Said a hospitalized Bottcher.

Bottcher spent four hours in surgery whilst they tried to reconnect his femur to his hip. Outraged rodeo fans are now asking for the sport of Bull Poker to be banned. Funny, you don’t get the same outrage when the animals are mistreated.