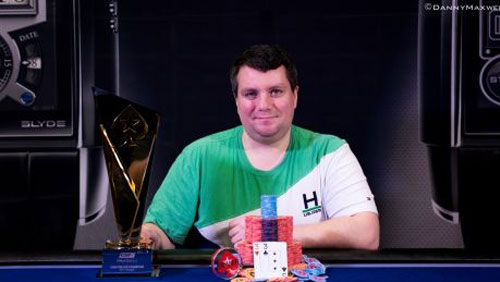 Russians were the most populous countrymen, and women, present at the European Poker Tour (EPT) Prague, and so it should come as no surprise that one of them eventually walked away with one of the biggest prizes.

Andrey Zaichenko defeated the Lithuanian Laurynas Levinskas, in heads-up action, to take the top prize in the hotly contested €10,300 High Roller event at the close of EPT Prague. It’s only the third live tournament win of Zaichenko’s seven-year career, and his first major title of any significant note.

The victory takes Zaichenko’s total live tournament earnings to $2.2m, with close to 50% of that haul coming this year – a 17th place finish in the 2014 World Series of Poker (WSOP) Main Event netting him $347,521 in the summer.

23 players entered the third and final day of action, and the final table of eight was set after serial deep runner, Dan Shak, fell in ninth. The first final table casualty was Clavio Anzalone. Sitting on a short stack he found himself all-in in a three-way pot versus the might of Zaichenko and Ole Schemion. The action reached the turn before the Russian elbowed the skillful German out of the pot, and his [Jc] [Ts] was good enough to beat Anzalone’s [Ad] [Qh], after flopping a ten.

Seventh place belonged to Joao Vieira and it was another double team that sent him to the rail. Zaichenko and the Frenchman Francois Billard both holding ace-king, in a pot that saw the short stack of Vieira moving all-in blind. An ace on the turn delivering a split pot as the Portuguese player showed [9s] [5d] for the bag of bones.

The most dangerous man at the final table was eliminated in sixth. Global Poker Index (GPI) #2 ranked player, Ole Schemion, started the day as the chip leader, but would exit shy of the big money positions: [As] [8h] v [Ad] [Kd] of Levinskas doing the job.

Goryachev was out in fifth when his pocket jacks crumbled against the [Ac] [Qd] of Levinskas, and the final three were left to discuss a deal after recent CalvinAyre.com guest, Simon Deadman, was eliminated in fourth, when he ran [As] [8c] into the pocket eights of the eventual champion.

The deal locked up €448,180 for Zaichenko, €412,905 for Levinskas, €405,260 for Billard and €38,000 to play for. The shoulders dropped a little, smiles broke out on faces, and the action resumed. Billard exited in third when his [As] [Ts] failed to beat the [Ks] [Qd] of Levinskas, thanks to a lady on the turn; and Zaichenko found the luck that all great champions need when he disposed of Levinskas 33 v 99 when a third trey appeared on the turn.