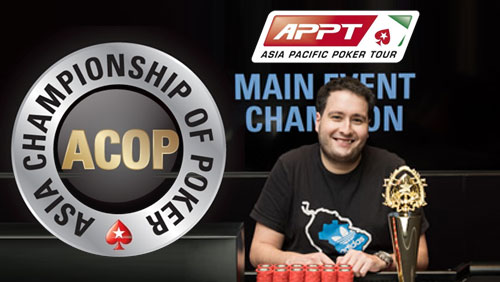 The Canadian Gabriel Le Jossec has prevented history being made at the Asian Pacific Poker Tour Season 8 Asian Championship of Poker Main Event, by defeating the reigning champion Sunny Jung, in heads-up action.

Le Jossec’s victory – only his third live tournament cash of his career – prevented South Korea’s Sunny Jung from retaining the title he won back in Season 7, when he defeated him in heads-up action.

291 players created a total prize pool of HK$27,092,100, and the final table was laden with some great stories, including that amazing run by Jung, who cemented himself as the number two in the all-time Korean money list after his second place finish.

Barer, the 2014 Aussie Millions winner, was coming fresh off the back off a third place finish in the ACOP Warm-Up event, where he earned $75,700, and was one of the favorites for the title before he exited at the hand of Jung, in fourth place, after his [Ah] [7h] bumped heads with the pocket kings of the Korean. Barer has so far earned $2.4m in 2014 alone.

Another man with exceptional Macau form was the former November Niner Joseph Cheong. The young Asian American had recently finished fifth in the ACOP Super High Roller, and his seventh place finish in this one meant Cheong walked away from the ACOP series with over $700,000 in prize money.

Then you had the formidable Russian, Vladimir Troyanovskiy, who was coming into Macau on the back of two final tables in the recent European Poker Tour (EPT) London Festival, where he finished sixth in both the United Kingdom & Ireland Poker Tour (UKIPT) Main Event, and a £2,000 No-Limit Hold’em (NLHE) side event. Troyanovskiy suffering one of those nightmarish bad beats when his pocket queens, were hit for six against the pocket tens of Jung, after a third ten appeared on the flop, to see him tumble out of the event in fifth.

Jung would get his chance to go back-to-back after eliminating Zuo Wang in third place to take the chip lead into the end zone. Le Jossec showing plenty of spirit to fight his way back into contention before eventually flopping bottom set, against Jung’s top pair, to capture the biggest prize of his poker life.