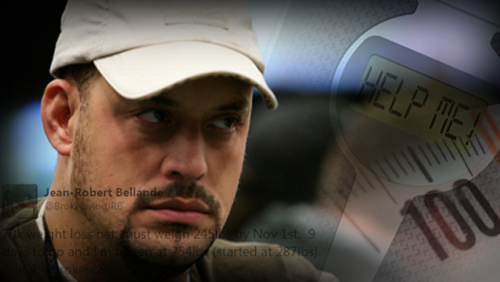 Jean-Robert Bellande reaches out to his 58,000 Twitter followers in a desperate attempt to avoid dishing out $70,000 in prop bets, as he faces the difficult proposition of losing nine pounds in the next nine days.

It’s been a good few years since we worried about the financial status of Jean-Robert Bellande. Driving around town in an open top Bentley, and taking a seat in a $1m buy-in poker game, tends to lessen the belief that you are Broke Living. But it’s still going to sting if he has to part ways with $70,000 if he can’t get to grips with his latest prop bet.

We sat down with Bellande during the One Drop action, in the summer, and he told us that he had made a $70,000 weight loss prop bet. The term of conditions were to transition from 287lbs to 245lbs, by Nov 1st, and with only nine days to go until that deadline is breached, things don’t look too good for Dan Bilzerian’s BFF.

The man who is set to benefit, most, from Bellande’s inability to shift the weight is Bobby Baldwin. The multiple World Series of Poker (WSOP) bracelet winner, and Poker Hall of Famer, owns $50,000 of that bet – it’s unknown who has the other $20,000.

Back in the summer, Bellande was very confident about dropping the weight when he told us: “I have already lost 10 pounds and we have only gone one month and I’m not crash dieting or anything, so we’ll get there.” That confidence has since vanished.

So what advice do his Twitter followers have to give?

“Seek advice from some of those hot bulimic whores you always hang with…” Tweeted one lovely young man, “Bike for 2-3 hours a day and sit in a sauna for an hour a day. Stay away from carbs. You can easily do it,” tweeted another, and, “This is pretty easily reached. Just run with trash bags wrapped around you in a sauna,” came another.

A lot of positivity, but there are a few people who believe Bellande is in trouble. “You are drawing dead,” typed one young man, and another said, “Pound a day? You’re DOOMED.”

So can Bellande do it?

Perhaps, you need a visual to get your head around it?

To shed nine pounds Bellande is going to have shift the equivalent of a Thanksgiving Turkey, forty sticks of butter, a bowling ball, a sack of spuds, three two liters of coke, an average sized three month old baby, a small microwave oven, a vacuum cleaner, or a large watermelon.

One man who Bellande could turn to for help is Ted Forrest. The multiple WSOP bracelet winner, tweeted: “9 lbs. in 9 days? I would bet on you if I could find somebody who would actually man up and pay when they lose a bet.”

It was a short little jab at Mike ‘The Mouth’ Matusow, who famously refused to pay a $2m forfeit after Forest lost more than 50 pounds in weight, during one of the most daring prop bets in poker’s history.

Matusow initially refused to pay the money because he was waiting for Forrest to starve to death.

Now he just couldn’t give a shit.