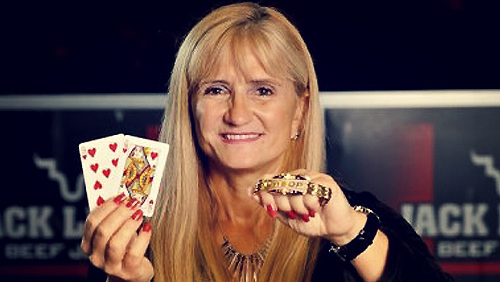 World Series of Poker bracelet winner, Marsha Wolak, remembers the first time that she walked into a live poker room. She was extremely intimidated and this is one of the reasons why years later she launched Femme Fatale Poker Training for females. Here she is talking to Lee Davy about that concept and her goal to branch out even wider.

Marsha Wolak started playing poker seriously after the real estate market collapse in 2008. Prior to that she had been a real estate broker, and investor, for two decades. Then, after winning a poker tournament on PokerStars, she decided to see if she could use poker as a way of replacing the income she had lost through the real estate crash.

Wolak turned professional in Jan 1st, 2011, and won $250,000 in her first year, including a World Series of Poker (WSOP) bracelet, after defeating Karina Jett in the heads-up stage of the $1,000 No-Limit Hold’em Ladies Championships, where she defeated a field of 1,055 players.

In a bid to give back to the poker community, and to help attract more women into the game, Wolak started Femme Fatale Poker Training, the only poker-training site specifically for female poker players, and it’s this reason we have invited her onto the show.

How was Femme Fatale Born?

“The initial plan was to attract more female poker players to the game. I personally started online and wouldn’t walk into a live poker room because I was too intimidated. I figured the reason that only 5% of the fields are women, is they are also intimidated. So I decided to open an online training site for women.

“Then men also wanted to join, so we opened it up to them also. The optimal NLHE style is not geared to being a women or a man – there are advantages that both sexes bring into the game – but the fundamentals are all neutral, and not gender specific.

“As we have grown we have realized that our training style attracts both men and women. With that in mind we have created a parent company, and training site, that is much bigger than what we are currently running. Femme Fatale will be a part of that bigger company, so we can have specific training sessions just for women, and also provide a service for men.

“When we started we were unique. We are still going to maintain that uniqueness. But it’s silly because poker is not a gender based sport. It’s your mind, not your body. Women like myself are intimated about playing live poker, and I don’t want them to be uncomfortable, and if having a female only platform helps them then that’s what I want to provide. I am one of the most brave and fearless women out there, so if I was afraid then more women will be.”

Was it a financial decision to branch out to men?

“Americans have a stigma for being financially motivated, but I am doing this for other reasons. I need to make enough money to keep the site going, but money is not the main motivation. Our main business is playing poker for a living. This site is a way to give back to the poker community, and we are doing it in a very unique way.

“We have weekly online sessions, guest pros – it’s all very interactive. I don’t want to just limit all of these wonderful things to just 5% of the poker community. This site is not about making money. We are having so much fun and getting great feedback. The information is very current. When I started in 08 I bought every book, signed up to every training site, and learned everything. But most of the stuff you find in books today is extinct. Everything we teach today is very current.”

What do you look for in a great coach?

“They have to be a good genuine person who can relate well to people. Knowing the material is not enough to be a good instructor. You need good people skills, good communication skills, and I love to see down to earth people who make me laugh. We have two other women coaches and a guest pro, Ronnie Bardah, who helps us with our live training events. We are very selective because the synergy is very important.”

How did your relationship with Bardah form?

“We have been friends since I started playing in South Florida a few years ago. He was sitting at my table and I could tell right away that he was a genuinely nice person. What is really awesome about Ronnie is he is not from a book. He teaches from his heart. He helped us with our first live training sessions at the $10m Guaranteed Hard Rock Seminole Poker Open and he was mind boggling.

“He told me had never done it before. I told him to just take it from the heart, and he blew us away. He had the highest feedback marks of any coach. A lot of subjective issues cannot be taught from books, and this is where Ronnie comes into his own.”

How did you win the contract to put on live coaching sessions during the $10m Guaranteed?

“The Hard Rock approached us because they wanted a live training session to prepare players who were quite new to the game. I was honored that they approached our company. They liked what we were doing and it was an absolute blast.

“We have plans to do a presentation in Tampa at the Hard Rock there. We are not going to limit ourselves just to the Hard Rock. We would like to branch out. Femme Fatale is going to be part of a bigger company so we are pretty excited. It started as an online training site, because of the limitations on time. But now we are doing two online sessions per week for our students, and rotate and take turns, so we have been able to branch out and do live training also. A goal of ours is to have at least one live training session at an event each month.”

What makes you different from your competition?

“I thought I could do it better. There was so much missing from other training sites. We do private lessons, but also host wonderful group lessons. We have interactive white boards, where we share the desktop so you can add your comments to hand analysis. We can interact together, and that’s awesome. We have power point’s each week, and also quizzes. We don’t only want to know you are paying attention, but are you also learning what we are teaching you. We also give you homework to ensure that you apply what you are learning. We open the mic for everyone, so it’s extremely interactive. We love the open mic because if you have a question, or are unsatisfied, how are we to know? It’s totally unique and different from anything else out there.”

I believe one of the reasons that female players don’t do as well as male payers is because they are not naturally as aggressive – is this something you teach?

“Absolutely, I am showing women that you have to be aggressive to win. You cannot be passive. We show mathematical evidence that aggression works; all the way back to tournament structures and payoffs. I finished fifth in the world last year in terms of number of cashes, but I would trade that for one big tournament win. I don’t want to appear in the Top 100 top cashes I want to be on the top money list and I have changed my game to achieve that.

“To get women to be more aggressive I am forcing them to do it. It doesn’t come naturally. I am explaining that over time they will see the monetary rewards that aggressive play creates. Homework is helpful. We make them accountable for doing their homework. We worked on four betting light the other day – we had to force them to do this. The majority of women have never done this before. I hadn’t done this in the past. Now everyone is three and four betting light so if you don’t adapt you are never going to win a big tournament.”

If you are interested in some great interactive coaching sessions then head over to www.femmefatalepokertraining.com and introduce yourself to Marsha.