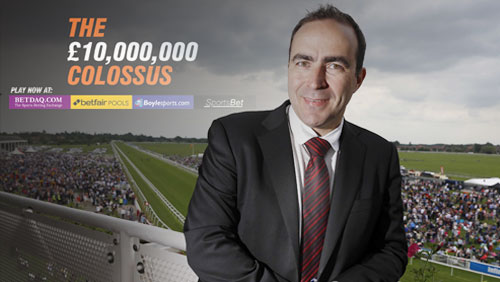 A Google search will tell you that lotteries have been around for centuries, with the first recorded history of a lottery coming from China around 200 BC. Hundreds of years later, we are still betting on lotteries and collectively spending billions of dollars each year.

Despite the terrible odds of winning and the lack of skill involved, the idea of hitting a massive jackpot is tantalizing to the masses. Now imagine that those odds were improved and a degree of skill was introduced.

Pool Betting–also known as sports lottery–has similarities to the lottery industry, but rather than drawing random numbers, the outcomes are based on the results of actual sports matches.

Bernard Marantelli, CEO & Founder of Colossus Bets, is a firm believer that gamblers will open up their wallets to the concept of Football Pool Betting with the lure of a massive jackpot and the challenge of predicting the outcome of football matches.

So why does he say this?

At a very young age, Marantelli was taught odds and risk management by his father who is a bookmaker. After working in the biotech and banking industries, Marantelli spent ten years as a professional gambler with a focus on exchanges and multi-leg bets. During this time he identified room for improvement in pool betting offerings and after his proposals to help the operators were declined, he started Colossus Bets.

As Marantelli explained to me, his plans are to replace the very firms that declined his help.

Intrigued, I spent some time with Marantelli to learn more about the concept of football pool betting, where the opportunities lie and exactly how he plans to dominate the space.

Becky Liggero: Thank you very much for joining me today, Bernard. Let’s start with why you believe big pool jackpots on football are the future.

Bernard Marantelli: If the public will bet billions annually on boring lottery numbers drawn randomly from a barrel, which gets resolved in minutes with so little excitement that many forget to check their tickets till days later, what is the potential for a skill-based football lottery, resolved over a weekend of prime time TV, with shots hitting the crossbar, red cards and penalties being awarded and added time to negotiate? We believe the public, or at least the male half, will bet even more on sports to win prizes like our £10 million starting minimum for the Colossus. I think this will be most apparent on a pool based on football (soccer) – the sport with which the world is infatuated and as such we will be able to build a global pool that exceeds £100 million.

So while we are sure it is the future, it is in some respects the past and present also. Littlewoods had a reported 9 million football pools players weekly in 1994 before they feel asleep at the wheel and let the National lottery take their clients largely uncontested. Today they have about 400,000 players weekly.

Meanwhile Sky have over 700,000 weekly players of a free to play correct score Pick 6 game (similar but vastly inferior to our 7 leg Colossus). Add to this Sweden’s V75 (turnover circa. £480m annually on Swedish trotting) and Spain’s La Quiniela (circa. €380m annually on Spanish football including, lower leagues) – both show that the sports betting public will embrace lottery-sized prizes on sports, and with due respect this is on regional sports with little global interest. Given the success of these niche products, what is the potential for a well-marketed jackpot game on Premier League football with truly global buy-in? I believe there is the potential for a football lottery to be the first billion dollar annual product, with over 10 million weekly global players

BL: Interesting predictions. I did not realize the history of pool betting and its prominence in Europe. What opportunity is there in Asia for football pool betting?

BM: The (white) Asian market is massive, the grey and black ones even larger reputedly, and reliable figures indicate the Chinese Sports Lottery (largely equivalent to European football pool games) is showing strong growth annually and over the last 5 years Asia has overtaken Europe in terms of sports and lottery betting – so the potential is massive.

All of this is good news for Colossus Bets’ ethos and products and not surprisingly we are in dialogue with a number of Asian-based operators in relation to the distribution of our products, including Fractional-cash-in and the use of our risk management expertise in Asia.

BL: There really is so much opportunity in Asia. How much crossover do you believe there is between traditional fixed odds betting and football pool betting?

BM: In Europe and online, it is easy to forget that most of the world’s betting volume is pools based. Australia, USA, Hong Kong and Japan are all dominated by pools and even in markets where fixed odds betting dominates, pools and lotteries are still widely played and understood. We do have a little education to do but with a £10,000,000 minimum prize (and punting immortality for the first person to take it down) we are not finding an issue bridging any gap that may exist between pools players and fixed-odds punters. With the added allure of Fractional Cash-In, once traditional punters find our products I don’t think they will revert to the old-fashioned acca bet.

BL: We’ll be sure to watch this space, then. So what are the main benefits of this “Fractional Cash-In” you mention, one of your latest innovations?

BM: For the uninitiated, Fractional Cash-In enables players to sell all or part of a ticket which is ‘live’ during the progress of a multi-leg game.

This feature does not just remove the all or nothing element of traditional multi-leg betting – by enabling players to take profits in increments from a ticket as the pool progresses, Fractional Cash-In allows players to have their cake and eat it.

Imagine you’ve landed the first 6 scores in the Colossus and are the sole player with 1-1 selected in leg 7. You can expect to be offered around £800,000 for your ticket, so you could bank £400,000 there and then, whilst keeping the other 50% of your ticket to shoot for half of the £10,000,000 prize. You could go on to bank more profits at half-time in leg 7 (assuming 1-1 is still a live score) and may have already taken money off the table as the bet progressed through earlier legs. It makes multi-leg betting live and vibrant, and crushes lottery in terms of engagement.

Fractional Cash-In also generates some great feelgood PR stories around players taking profits from tickets which go on to lose. In a single weekend last season we had players making Cash-Ins on just a part of their tickets for £53,000, £57,000 and £84,000 respectively, all from tickets which had cost less than a tenner and all of which subsequently went on to lose! And make no mistake every social media interaction about a valuable ticket inspires 50 responses on what each person’s Fractional Cash-In strategy would be!

BL: I love your point about “feel good” PR and social media activity- added bonuses for sure. So why would affiliates choose to promote Colossus Bets over more traditional sports betting sites?

BM: Two killer reasons: first, we offer lifetime revenue share on a unique product which has no equivalent. This can help affiliates to grow the pie rather than switching their players from one traditional operator to another. This gives the affiliate an opportunity to get in on the ground floor, like affiliates who helped betting exchanges sign up good players a decade ago.

Second, the terms of our affiliate scheme are ground-breaking. We pay affiliates 5% of player stakes and 2% of both player wins and player Cash-Ins. It’s an entirely turnover-based affiliate scheme. No more being penalised for introducing winning players – in fact the more that players win the more our affiliate partner will earn. We’re also on the Income Access platform, trusted by and familiar to many affiliates.

BL: Seeing as mobile is a popular subject these days, how is your desktop offering comparing to your mobile offering?

BM: We have seen a big uptake on our mobile offering, particularly since the introduction of our fully functional mobile app in the early part of this year. In terms of total player registrations, 70% take place on the mobile platform (partly due to our marketing focus to date being social/mobile) and 54% of all wagers in Colossus Bets pools are placed via mobile as well – some convincing numbers to highlight how the modern day punter tackles our life-changing football jackpots.

BL: Bernard, its been a pleasure. Thank you very much for enlightening us on the subject of football pool betting and for informing us on Colossus Bets.