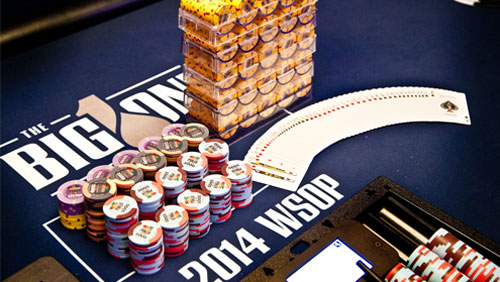 LAS VEGAS – (August 5, 2014) – The World Series of Poker (WSOP) provides a terrific platform to raise awareness and funds for charity, but it is the poker playing community whose generosity continues to make the poker industry one of the greatest philanthropic success stories in the United States today.

Caesars Interactive Entertainment, Inc. (CIE), the Rio All-Suite Hotel & Casino and the World Series of Poker (WSOP) worked together this summer to support ONE DROP, an international non-profit dedicated to providing access to safe water for all, today and tomorrow. Their efforts comprised: the world’s largest buy-in poker tournament,– WSOP’s The Big One for ONE DROP; a small buy-in poker tournament – The Little One for ONE DROP; and donations provided by players who cashed in WSOP events – dubbed the All in for ONE DROP campaign.  These endeavors all provided the platform in which players of the game showed their overwhelming generosity and support.

At this year’s WSOP, the goal was to exceed $5,000,000 in funds raised for ONE DROP (www.ONEDROP.org) and once again, the poker community didn’t disappoint.

These amounts exclude any donations the remaining players in the WSOP Main Event make in November.

“This year’s results are once again outstanding,” said Guy Laliberté, Founder of Cirque du Soleil™ and ONE DROP. “We can really say that everyone has come out a winner, not just the players but all the communities who will benefit from the generous amount raised.”

The WSOP began working with ONE DROP in 2012, creating the Big One for ONE DROP event, the first-ever $1 million buy-in poker tournament, which included an 11.11% charitable component.  Since the WSOP-ONE DROP alliance was formed, $12,205,089 has been donated to ONE DROP via the CIE/WSOP/Rio platform.

“We are very proud of the poker community who has opened their hearts and wallets so generously in order to make a difference,” said Caesars Interactive Entertainment Chief Executive Officer Mitch Garber. “Poker is a game played globally, and ONE DROP is a tremendous organization working tirelessly to sustainably improve people’s lives. We are very appreciative and thankful for everyone who continues to contribute to the incredible success of this initiative.”

In addition to the $12,205,089 in financial contributions, an additional $5 million of in-kind donations inclusive of tournament costs for hosting, operations, television production and marketing have also helped support the ONE DROP cause.  Poker dealers, floor supervisors, registration and payout clerks, and a host of others have all helped contribute with their time, resources and donations.

ONE DROP uses donations to directly implement water access projects, where an average of $100 can transform someone’s life forever.  The relationship between WSOP/ONE DROP has resulted in a direct positive impact on the lives of over 100,000 people.

As the largest single-year donation ONE DROP has received from a corporation since the charitable organization’s inception, this donation will have far reaching impacts. The contributed funds will be dedicated to ONE DROP water projects in West Africa, India and Central America aimed at providing safe access to water today, and for future generations as well as sustainable income generating opportunities. With two new projects set to launch in Mali and India in 2014, ONE DROP is rapidly increasing the scale and impact of its work to transform as many lives as possible.

ONE DROP—a non-profit organization created in 2007 by Cirque du Soleil Founder Guy Laliberté – strives to ensure that water is accessible to all, today and forever. ONE DROP significantly and sustainably improves living conditions through innovative projects which promote self-reliance in communities worldwide. To learn more, visit www.ONEDROP.org.

The World Series of Poker (WSOP) is the largest, richest and most prestigious gaming event in the world awarding millions of dollars in prize money and the prestigious gold bracelet, globally recognized as the sport’s top prize. Featuring a comprehensive slate of tournaments in every major poker variation, the WSOP is poker’s longest running tournament in the world, dating back to 1970.  In 2014, the event attracted 82,360 entrants from 110 different countries to the Rio in Las Vegas and awarded over $227 million in prize money.  In addition, the WSOP has formed groundbreaking alliances in broadcasting, digital media and corporate sponsorships, while successfully expanding the brand internationally with the advent in 2007 of the World Series of Poker Europe. For more information on the World Series of Poker, please visit www.WSOP.com.