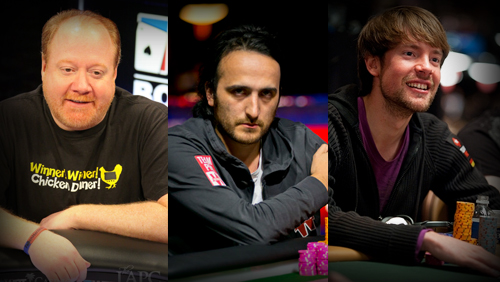 The Belgian, all-time number-one-money earner, defeated Gordon Vayo in a rough and tumble heads-up encounter which spilled into a fourth day of action, to capture the $508,640 first-prize.

It’s a victory that will propel Kitai into the Global Poker Index (GPI) Top 10 after a quite amazing run of form that has seen him secure close to $1.4m in cashes in the last three live tournaments he has played.

“I had a goal to win a bracelet, and I ship it in my first event out here,” Kitai told PokerNews. “I also won the last event I played, and finished third in the event before that. I am on a big rush. Perhaps I should play the One Drop next?”

Astute businessmen should take note. If you want to take a punt in the biggest tournament in the world, then you can do a lot worse than select the Triple Crown winner as your horse. Just don’t ask Phil Hellmuth Jr. for his advice on the qualities of Kitai’s play.

“You are never going to win this event,” Hellmuth told Kitai in the closing stages of the tournament.

I guess Hellmuth wasn’t aware of Kitai’s credentials; in the same way that a lot of people are not aware he isn’t French!

Dan Heimiller has reigned supreme in the largest-ever Seniors event to hit the tables of the WSOP, and his second title comes 12 years after he secured his first.

It may have been a long time coming, but the last two years have been somewhat of a renaissance for Heimiller, as some decent scores—in the World Poker Tour (WPT) in particular—has seen his names uttered more frequently on the highest stage.

4,425 players entered the event and Heimiller wasn’t the only well-known face to make the final table. Dennis Phillips was the runner up to Alyn Shulman, in this event back in 2012, and he would pick up fifth place for another respectable score of $153,883.

Once Phillips was pushed aside, you knew the experience of Heimiller would shine, as long as the Poker Gods didn’t jab him with any forks of lightning.

We could have had two very different headlines this morning, after George Danzer and Brandon Shack-Harris squared off in the heads-up phase of the first-ever $10K Seven Card Razz Championship event.

Danzer was making his eighth final table appearance, without ever winning a bracelet; and Shack-Harris was trying to become the first player of the series to capture two.

In the end Germany prevailed over the red, white and blue, as Danzer took the first prize of $294,792 to halt Shack-Harris’s charge at the final stand.

Keep an eye out for Mustapha Kanit, who broke a record by becoming the first-ever player to win two Aussie Millions events in the same series at the start of the year. Kanit starts the third day of action on the shoulder of Sunny. John Hennigan is also in the mix in that one.

The final table of Event #20: $3K Shootout is set, and it’s a case of Master VS Pupil as the RunItOnce founder Phil Galfond headlines a final table that contains one of his star teachers Dylan Linde.

Linde has been in fine form this year, with two deep runs to his name in large field Hold’em events, and Galfond made the final table of the $10K 2-7 Triple Draw event where he finished sixth.

The very popular Taylor Paur is making his second final table of the series after finishing sixth in Event #11: $1,500 NLHE Six-Handed just a few days ago.

And finally, Event #22: $10K H.O.R.S.E Championship attracted 200 of the world’s greatest mixed-game players, and the former WSOP Player of the Year, and recent Heartland Poker Tour (HPT) Californian State Poker Championship winner, Jeff Madsen, is leading the way 129,200. Over 108 players remain in that one.