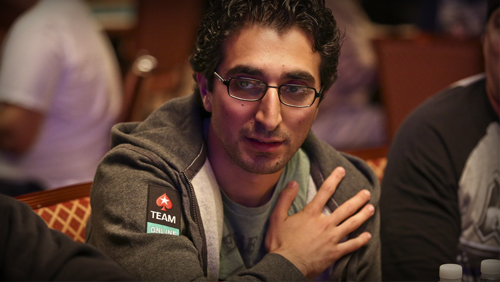 Lee Davy sits down with PokerStars Team Online member, Gabriel Nassif, to talk about his early days in the game; his role at PokerStars; Magic the Gathering and much more.

The first time I cast eyes on Gabriel Nassif was in the Aviation Club de France (ACF) in Paris, and I wasn’t a happy bunny. I was there to cover the World Poker Tour (WPT) Main Event on behalf of PartyPoker. The day had ended but I was asked to stay late to work on a special sit n go that featured Tony G.

He was so drunk that he gave a waiter a €5k tip just to get him a cognac. I remember because it was the only exciting thing that happened all night.

Nassif was one of the players in the SNG and as he was kitted out in PokerStrategy patches, and I just figured he was a fan, who had secured his opportunity to play with the future King of Lithuania through his affiliation with the site.

“I remember that night,” says Nassif, “Back then I was just grinding online and coming out here in the summer. I was also making videos for PokerStrategy and was their representative from the French community. I was the one that organized that sit n go and why I got a free roll.”

So it’s Nassif’s fault I had to work that late!

He won it as well, if memory serves.

So, from beating up Tony G to representing the biggest online poker site in the world. How did that happen?

“I have been with Stars since 2012. It’s a mix of everything really. I was playing a ton on Stars, I was decently well known and well liked in the French poker community, I was coming out here in the summer and had a bunch of cashes and some final tables. I also knew the other team pros. The likes of ElkY and Julian Brecard; so it was a mix of everything that made me the right candidate I guess.

I ask Nassif what his roles and responsibilities are with PokerStars?

“You play a ton online – I play a lot of cash games, some tournaments and be friendly in the chat. I also do the commentary in French for the EPT’s. They don’t really consult me for decisions, and I guess playing in the World Series is a bonus for them. They don’t expect me to come out here and play a ton of events, but the French Poker Series (FPS) is an important event to play in for them.”

So is his deal with Stars exclusively online?

“It’s a mixture of online and live – but mostly live FPS events. So when I come out here I am on my own money.”

I wonder if playing on his own money affects his approach to the game?

“To be honest I am backed for all live events. For the first few years I used to come out here and play on my own bankroll. I guess I could do that now, but I have a pretty good deal. I get my own action when I play live cash games, or when I play online. It definitely helps to be backed. I don’t know if it makes me play better or worse, but I don’t feel the pressure, for sure, when I go through 100k swings live.”

“Last year, I had a pretty mediocre year online, but between the contract, live tournaments and also doing coaching videos I did ok. I am a bit too sensible for a poker player. The top poker players seem to have more gamble in them, and are crazier than me. And now I am married, so I am even more sensible. I would like to take more risks, but I guess not doing so is one of the reasons I have been around for so long.”

Not many people know this, but Gabriel Nassif holds a 2014 WSOP record.

Do you know what it is?

He has appeared in more winner’s photos than any other player.

“{Laughs} I have been in Brock’s {Parker} and Justin’s {Bonomo}photo. People are taking the mickey out of me and are asking if I am even playing out here.

“I have known Justin for over 10-years. The first year he came to EPT Deauville he stayed with me and made the final table. Brock actually taught me how to play poker, and the first time I ever played online poker was at his place over 10-years ago.”

So how does a Frenchman end up being so friendly with a group of Americans post the poker boom?

“Magic the Gathering – that’s the connection. I didn’t know Justin super well, but I was already good friends with Brock, Eric Froelich and William Jenson. I went there to hang out and practice a bit before a big Magic the Gathering tournament, and they were all clicking buttons. I got interested in what they were doing, they showed me the game and I came back home and really got into it.”

Do the guys still get together and participate in Magic the Gathering tournaments?

“Yeah we do. There are four big tournaments a year and I go to all four. Brock is sometimes qualified – right now he is. Same with E-Fro and Billy Jenson. It’s one of the reasons that I come out to the WSOP. It’s nice to win money, but the main reason I come is to connect with all of my friends.”