The inaugural SBC Betting on Football Conference took place today at the Chelsea Football Club in London, the world’s most perfect venue for an event of this nature.

Throughout the day, over 100 professionals representing various bookmakers, football clubs, marketing and PR companies, trade publications and payment providers came through the doors and in many cases, learned something new. 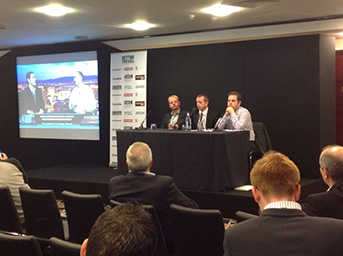 One of the biggest wins today was the venue- just about all delegates were inspired and impressed when they arrived at the Chelsea Football Stadium and praised SBC for choosing such a high class location.

Another win was the variety and quality of speakers, all experts in their respective fields.  The layout of the event facilitated interaction with these speakers (and other attendees) both during their presentation or at some point after as everything took place comfortably in one big room.

SkyBet is almost one year deep into their five-year sponsorship of The Football League, a league that is made up of a whopping 72 Football Clubs.  Painter shared that 50 thousand fans go and watch games every week and The League websites have seven or eight million unique users a month, so we’re talking huge numbers for SkyBet brand awareness.
The first year of SkyBet’s sponsorship with The League has mainly been about branding and building relationships while year two will be about engaging fans and giving them something to talk about in relationship to the brand.  Painter mentioned that Coca Cola is the one brand that activated their sponsorship properly with The League and therefore he plans to use Coca Cola’s strategy as a model for his.

While SkyBet still has a lot of work to do with this sponsorship, Painter

did confirm he has “hard commercial evidence that sponsorship is really driving [SkyBet’s] performance and acquisition”. 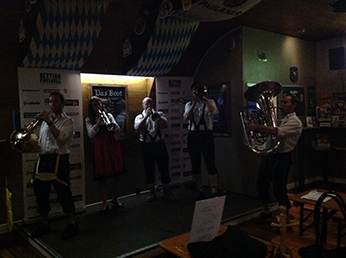 When asked how Fulham chooses what brands to work with, Webb confirmed its not just about the money and that their partners must also buy into Fulham FC’s values.   Webb also lives by the mantra that its Fulham’s job to maximize every partner they have and to keep a constant dialogue with these partners, further supporting the notion that to have a successful partnership, it must go beyond the money.

The use of social media was another popular topic today and has proven to be quite useful for boosting fan engagement with football club sponsors.  Webb shared that Fulham gives their partners access to “behind the scenes” images for social media use, an opportunity for partners to be quirky and funny, or to even run promotions for ticket giveaways.  He suggests partners tailor their social media to markets Fulham is strong in, for example, Fulham currently have a Ukrainian player on the team and therefore a large Ukrainian twitter following- tailor tweets to them, he says.
Painter agreed with Webb and added that “its about reacting quickly and sending around tweets and pictures of what fans want to see”- pictures of awards and metals, imagery and behind the scenes.  He also added that when SkyBet tailors their social media posts to each individual club’s website as opposed to generic posts, the results have increased.

Another panel today included industry veterans Rob Harnett, CEO of Sport for Business and Mark Davies, one of the very early executives at Betfair and more recently the Founder of Camberton Communications.  The two industry experts discussed the implications of new licensing laws in the UK and their potential impact on football sponsorship.

An even larger fear is that betting companies could potentially be banned from adverting with football clubs all together. 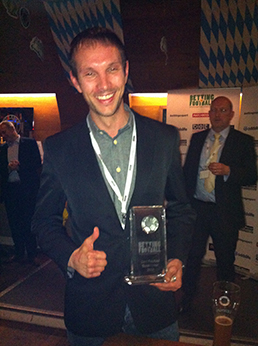 “Sport need companies to compete for advertising”, said Davies.  If alcohol companies, tobacco companies and gambling companies are banned from advertising, there are not many industries left who could afford and justify the hefty price tag, he pointed out.  To make sure that revenue stream does not get pulled, Davies said “its up to the sport and betting industries to start separating out some of these issues that are being thrown into a mix together and muddying the waters”.
Once the day’s sessions were over, the delegates migrated down the road to the German-themed Oktoberfest Pub featuring a legendary Oompah band, several rounds of prizes, plates of chips, racks of German pretzels and a whole wad of cash behind the bar enabling free and flowing pints of beer all night long.  The atmosphere for the evening was downright jovial and there’s no doubt about it, everyone in the place was having a good time.

To top it all off, after we all had a few, the short and sweet award ceremony went down and four well deserving companies were recognized for outstanding achievement in their field:

A big congrats to all the winners this evening and to the SBC News team for pulling off an exceptional inaugural event that provided value and fun for everyone.