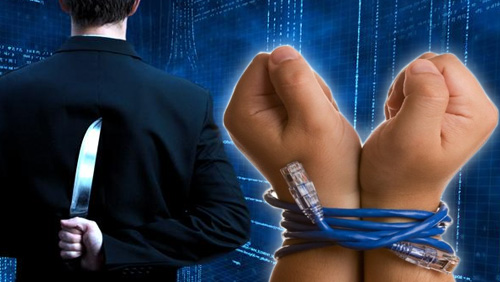 Back in February, the D.C. Circuit Court struck down the Federal Communication Commission’s poorly written net neutrality rules. In essence, the court handed the FCC a choice between classifying ISPs as utilities or allowing the monopolistic cable companies free rein to extort content providers as they see fit. The FCC’s limp response, first detailed late last week in the Wall Street Journal, is a set of rules developed by a former cable lobbyist that could destroy the open Internet as we know it.

FCC Chairman Tom Wheeler, an Obama appointee, wrote the new rules. They prevent ISPs from slowing down or blocking any kind of content, which sounds like the essence of net neutrality. But they also allow ISPs to charge content providers additional fees to guarantee faster delivery of their data, much like the deal struck between Comcast and Netflix, so long as the terms of their agreements are “commercially reasonable.” (The FCC on a case-by-case basis would judge whether a deal is reasonable.) So while there will be a baseline speed required by the new FCC rules, that speed is going to be a lot lower for content providers who don’t play ball.

If this sounds like a boon to an already highly profitable industry, there’s good reason. Prior to taking over the commission last November, Tom Wheeler was president of the National Cable Television Association and of The Wireless Association. Both groups have long been opposed to net neutrality. It’s not just Wheeler who’s serving as an inside man for cable, though. Four other high-ranking FCC officials responsible for shaping the new rules are former lawyers and lobbyists for major ISPs, including Comcast, AT&T, Verizon, and CenturyLink.

Knowing that makes reading the comments from an anonymous cable executive and the spokesperson for Verizon in the WSJ piece is a stomach-turning exercise. The executive suggests that the new rules mean companies will pay for investment in better networks and spare consumers the cost. But cable providers have dodged such investments for years, regardless of the Verizon claim that “tremendous innovation and investment (are) taking place in broadband Internet markets.” They’ve passed on increasing profits onto their shareholders year after year while their products have stagnated and there’s no good reason to expect them to change that profitable arrangement now that they’ve been given carte blanche to discriminate. The author and journalist Cory Doctorow put it best when he said, “The ISPs aren’t seeking to get paid, they’re seeking to get paid twice: once by you, and a second time because you are now their hostage and the companies you want to do business with have to get through them to get to you.”

If the FCC votes to move forward with the proposal at its May 15 meeting, not a lot will change in the early going. But as time goes by, the differences between the old, open Internet and the new corporate-approved version will start to show. Much like in modern American politics, those who pay the most money will have the most speech. Meanwhile tech startups, online gambling platforms, independent publications, and all sorts of others without the resources to pay for protection from the cable mafia will be left out on the fringes of what used to be an open and equal Internet.

What’s particularly frustrating here is that there’s no reason things have to be this way. American consumers are forced to deal with behemoth monopolies because of policy choices, choices which can still be reversed. One option that is still on the table is for the FCC to classify ISPs as utilities. It’s been the best option for the people all along, since it would maintain a level playing field for all kinds of content instead of prioritizing those with the biggest bank accounts. But with cable and wireless loyalists running the game, it’s seemingly more and more likely that whatever Comcast wants is what America will get.