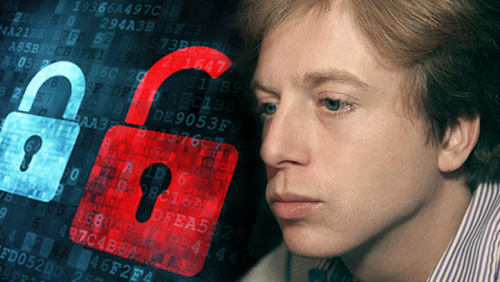 Before moving into his current digs in federal prison, American journalist Barrett Brown was a free man working on a number of projects, including a book called Keep Rootin’ For Putin: Establishment Pundits and the Twilight of American Competence. This month his legal defense fund, Free Barrett Brown, published that book for the price of a donation. Anyone interested in clear thinking about the American media establishment ought to consider chipping in a few dollars for a copy of this informative and entertaining read.

Though he is a writer and not a hacker, many know Brown best from his loose association with the online collective Anonymous. As an historian of the movement, his profile was raised via television appearances and interviews in documentaries about it. But it was as the founder of muckraking site Project PM that Brown landed in the federal government’s crosshairs. His work exposing the seedy underbelly of the intelligence contracting industry was the motive for arresting him on charges that he distributed stolen data from contracting firm Stratfor, all because he posted a hyperlink to the trove, which was taken from Stratfor by an unrelated hacker, in an online chat room. Never minding the First Amendment implications of criminalizing the very underpinning of the World Wide Web itself, the government indicted him on 12 charges related to that hyperlink in October 2012. For 19 months now he’s been locked away in federal prison, awaiting trial.

The government dropped most of the charges against Brown in March, and he recently signed a plea deal that could see him released soon. Until then, the world can get its fill of his unique voice with Keep Rootin’ For Putin. While he has written a few columns for VICE and D Magazine over the last few months, but this is his first long-form work to appear since his incarceration. An incisive and insightful thinker with a nose for investigation and a sly, self-aware sense of humor, he’s a perfect fit for the topic. Tackling America’s most muddled opinion-makers would make mush of a writer without such a canny ear for the absurd and hypocritical. Brown handles it with aplomb.

In his introduction to the book, Brown gives a brief history of 20th Century American evangelical prophets, noting that they were “both perpetually wrong in their predictions and perpetually successful in selling more of them even after the earlier ones had already proven to be wrong.” Then he draws a direct line to today’s media, saying that “the most respected and influential columnists of the last decade work in a similar fashion.” He takes equal aim across the political spectrum, giving everyone’s awfulness an opportunity to shine. Conservatives William Bennett and Charles Krauthammer get the full shakedown, but so do liberals Thomas Friedman and Richard Cohen. And the confused, generally bellicose anti-Islam crowd is represented by Martin Peretz. Unlike these five opinion-influencers, all holders of prominent posts at respected publications, Brown isn’t just making everything up as he goes. Every assertion he makes about these pundits’ work is drawn directly from words they’ve written themselves – and every deflated balloon he makes of lazy logic and self-contradiction is pierced by easily discoverable factual evidence.

He skewers Friedman for vacillating back and forth between mutually opposite opinions on Russia, Iraq, China, and nearly every other foreign policy issue of importance to America in the last 15 years, constructing his columns around frameworks “entirely dependent on wordplay, on convenient structural similarities between unrelated terminology, on rhymes and sayings.” He comes down on Krauthammer for staking out and forcefully arguing precisely the wrong position on all those foreign policy issues with stunning consistency. He roasts Bennett for his intellectual dishonesty and spurious claims about the efficacy of alcohol prohibition. He takes Cohen to task for writing a column in which he bemoans the fact that the internet allows people to know whether he’s previously staked out a position on an issue and hold his feet to the fire when he’s inconsistent. And he slams Peretz for being incomprehensible in his political views and his writing alike, diagnosing the latter as a symptom of the former being skewed heavily against Islam.

While Brown’s attention to detail is his most effective weapon, humor is a useful adjunct. A book about punditry is the last place one might expect to find lulz, but there they are. His numerous asides during the course of introducing historical context are frequently as amusing for the reader as they clearly are for the man writing them. And then there are the takedowns, lying in wait to slice the author’s targets with minimal effort and maximum impact:

“In 2007, Friedman finally noticed that Russia could no longer even be termed a democracy and promptly wrote a column to this effect. I will spare The Reader a long account of the unseemly events that occurred within that nation between the time of Friedman’s 2004 column and the 2007 column in which he finally admits to Putin’s autocracy; suffice to say that the political situation in Russia continued to degenerate to such a great extent that even Thomas Friedman eventually managed to figure out that something was wrong.”

“The New York Times, of all things, informing us that Bennett ‘brings refreshing intelligence and common sense to a debate long dominated by ignorance and confusion.’ This strikes me as a nice way of saying that Bennett is better educated than most of the people who believe the things that he believes.”

“If knowledge were a jigsaw puzzle, Peretz would not begin by sorting the pieces into groups based on similar color schemes in order that he might better undertake the gradual process of fitting them all together, as is the common practice among those who make it their business to complete jigsaw puzzles. Rather, he would begin by composing a poorly-written editorial to the effect that the Arabs are a warlike and untrustworthy people.”

“Indeed, search engines are extraordinarily easy to use. Richard Cohen, one may recall, thinks this a sad thing. Here’s an idea: Google yourself and figure out what the fuck it is you think before you attempt to influence the thinking of others. Better yet, resign.”

So what does it really matter that these writers are so terrible? Brown himself says into the book’s introduction that his purpose is “to convince the American reader that our republic is in the midst of an extraordinary structural crisis that threatens to cripple the nation and end its reign as the world’s foremost superpower.” It’s a big claim, but a believable one. These shapers of opinion routinely make big claims without research, explain complex phenomena with simplistic models, and cling to dogma whenever facts stubbornly get in the way. And they collect hefty fees for doing so, making their laziness and incoherence even more of an affront to the republic and its decent citizens. It’s unlikely that any of them will ever be fired, given their positions within the establishment media. But if a book like Barrett Brown’s can hasten a retirement or two and open up a spot for someone more in touch with the modern world, it’ll be worth its author’s efforts.