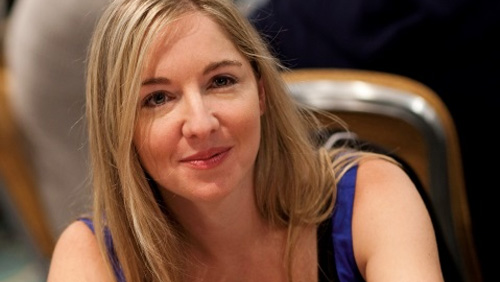 In this weeks Life Outside of Poker, Lee Davy gets the chance to sit down and chat with the jack of all trades and master of absolutely all of them: Victoria Coren.

Victoria Coren is a member of Team PokerStars, is a former European Poker Tour (EPT) winner, the host for the BBC4 show Only Connect, a former guest on Have a I Got News For You, a commentator, writer and all round charming young lady.

This is what she had to say about one of her many talents: the art of television broadcasting.

Was it always a dream of yours to work in television?

It definitely wasn’t. My dream was to be a writer. To begin with, all I did on television was the odd publicity interview if I had a book out. I remember being asked to present Late Night Poker – I was flattered, but nothing like as excited as I’d been when they first asked me to PLAY on the series! Nevertheless, I enjoyed the presenting (TV presenting is a lot easier than writing) and I was quite happy to do more of it. I’m still very choosy, I only work on shows I’m excited about, but I definitely do a lot more TV than I ever thought I would.

What were your influences in television when you were a child?

I didn’t have any, because I didn’t aspire to work in TV! I wanted to be like Jo March in Little Women, whom had stories published in magazines.

What was your first big break in television?

Hmm. I was involved in a couple of shows when I was a teenager; a kids’ comedy show that I wrote sketches for, and a debate show for teenagers made by BBC Education. They weren’t really “breaks” in the sense of being the start of something, because they were one-offs and I didn’t do TV for a long time after that. The first major mainstream thing I did was a documentary series for BBC Two called “Balderdash & Piffle”, about the English language. That was a proper prime-time show and I loved making it.

What is your proudest achievement in television?

I’m very proud to host Only Connect. It’s a clever quiz show for people, who are interested in a wide range of arcane things, and it became a real cult success on BBC Four – we started with 200,000 viewers and it gradually went up series by series until we had a million. I think that’s a sign of a real appetite among people for clever light entertainment that they don’t always get on TV; our viewers are a very devoted bunch of regulars and I’m proud to be part of a show that they enjoy.

When have you been the most star struck?

I recently interviewed Emma Thompson for a documentary I was making about Mary Poppins. I was totally dazzled by her. “Star struck” might be the wrong word because she’s such a warm and friendly person that I felt very relaxed in her company – I wasn’t all weird and stammering. But she’s a brilliant woman, a great writer as well as actor, and very much has the glow of the film star about her. So that was an exciting day.

Can you remember the first time someone asked for your autograph?

I really can’t. But I’m always delighted if anyone asks for it now; it’s increasingly rare, since the iPhone, because people usually ask for photos instead. I miss the old pen and paper; you can’t look fat in an autograph.

What advice would you give to someone wanting to work in the television industry?

I’d ask them to be a lot more specific – and if they couldn’t, I’d warn them they were going into television for the wrong reasons!

How did you secure your column in the Observer?

I started with the Observer by covering for other columnists when they were on holiday; after a while, they offered me a regular slot. I’ve written columns for quite a wide range of newspapers and magazines but that’s the longest running; I’ve probably been doing it for ten years now.

How do you choose what to write about?

It’s a topical column, so I read the papers every day and look out for stories that I feel strongly about or can see a way to be funny about.

Describe your experiences in the x-rated film industry?

Well, I’ve written a whole book in answer to that question so it’s quite hard to do in a couple of sentences! But my best friend Charlie and I, years ago, had a job reviewing adult movies for a magazine. It was just funny, reviewing porn films as though they were proper films, analysing the characters and plots and so on. But the films were so bad that we soon decided we could do a better job of writing and directing one ourselves. We were wrong. Our film is terrible. But we had fun trying. And the book is pretty good, much better than the film, probably because bad lighting doesn’t compromise it.

What poker players do you think would make really great x-rated film industry stars and why?

!! I don’t think I’m going to risk naming names there. Quoted out of context, I could really get myself in trouble! But it takes a very particular sort of person to survive the adult film industry and I’m not sure it’s a job I’d wish on anyone I know. Apart from the ones I know who are already doing it.

What are the biggest challenges you face as a broadcaster?

I can’t read an autocue because I’m too vain to put my glasses on. So if there’s anything really important that needs to be said, I’ve got a lot of memorising to do.

What has been your most nervous moment in broadcasting?

I’m always very nervous before comedy panel shows. It doesn’t matter how many times I’ve done them or how well they’ve gone before, I always envisage an embarrassing disaster. I think I do them to punish myself for spending so much of my life playing poker, which is so easy and fun that it shouldn’t really be allowed as a full-time job.

Who are your inspirations today?

I love women who aren’t afraid to be strong and clever in public – Joan Bakewell, Jo Brand, Kirsty Young, Mary Beard, Emma Thompson of course. (Lots of women in poker are like that too – Vanessa Selbst being a shining example. Strong women are quite drawn to poker). There are quite a few of them in the public eye, I’m glad to say. But still not enough!

Do you have goals and dreams connected with broadcasting or writing?

I think my poker memoir, For Richer For Poorer, is the best thing I’ve done. I’m truly proud of that, and I love it that most days I’m contacted by someone new on Twitter who’s just read it and related to it, or been entertained by it. I wrote it a good couple of years ago now but my dream is that it will stay in print for a long time and people will keep reading it. In terms of new things, I would quite like to write a novel one-day, a work of fiction. I’m not sure if I ever will. But I hope I will.