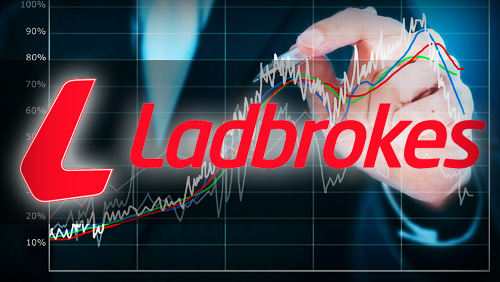 Consumers are ruthless. It doesn’t matter if you’ve been around for 130 years. If you’re not supplying the best product at the lowest price, you’ll lose. Due to a two-pronged attack that Ladbrokes has been as yet unable to fend off, the company looks lately like it’s been falling off a cliff. Its bottom line certainly has. With net income down to just £67M for 2013, that’s a 65% drop year over year. To put that in perspective, the drop from 2008 to 2009 during the global financial meltdown was only 63%, from £200M down to £74M. Ladbrokes is having a hard time, to put it mildly.

The two-pronged attack is coming from both the free market, meaning ruthless consumers abandoning betting houses and moving to digital, and just as ruthless government attacking betting houses legislatively. Both together are packing a one-two punch that has sent the longtime British bookies to the floor. In terms of government, wild Bank of England money printing is significantly upping the cost of doing business. Money supply is growing at a rate of 12% annually according to the latest data. The cost of revenue for Ladbrokes has gone up 46% since 2010 with revenues only increasing 14%. If that isn’t enough, British politicians are raising the profits tax rate on gambling machines from 20% to 25%.

In the moralistic undertones of Chancellor of the Exchequer William Osborne,

Fixed-odds betting terminals have proliferated since gambling laws were liberalized almost a decade ago. These machines are highly lucrative, and therefore it’s right we now raise the duty on them to 25 percent.

In other words, companies like Ladbrokes, whose profits are dropping off a cliff, are supposedly making “so much money” off these machines that the government needs to step in and take more. It’s only “right”. Ladbrokes and other bookmakers should actually be thanking the government for even allowing them to exist in the first place. This is happening all while the government is planning on letting its local municipal attack dogs loose on betting shops over and above the tax hikes.

As for the free market attack, as mentioned this is simply that consumers are moving from betting houses to digital betting. Lad has so far been unsuccessful in revamping its digital efforts at least insofar as current numbers show, and with the brick and mortar betting market stagnant, it’s no wonder its revenues have been just as stagnant.

It is in the midst of all this blackness that Lad’s share price has tumbled 43% since 2013 highs and continues its downward trajectory. The sense of frustration is palpable just by reading the company’s annual report, full of apologetic epithets, one can imagine whoever compiled it cringing and clenching his jaw as he put pen to paper.

But while Ladbrokes may be down, it is not out. From a technical standpoint, the stock is nearing long term support in the £1.20 range which has never been broken. From an operational standpoint, it is closing down 40 to 50 betting shops this year which will free up resources to expand its digital presence and cut down on operating costs. From a sentiment perspective, management has been lowering estimates and expectations like the bar at a professional limbo tournament. While that certainly isn’t “investment sexy,” it will help the stock find a bottom provided that Lad doesn’t underperform its own basement expectations in the upcoming 2 quarters. If anything, they are lowballing in an effort to surprise to the upside.

Is upside possible from here? Sure it is, if the deal with Playtech to enhance its digital performance pans out. So far it hasn’t, but the upgrade, which will streamline customers’ bets into one online wallet, has taken longer than expected. Now the company expects the upgrade to be completed in time for the World Cup in Brazil, which would be more than perfect timing.

As for the tax hikes and other government attacks on betting houses, on the plus side this could simply motivate Lad to transition to digital faster (they’ve certainly taken their sweet time so far), which is the only move that can save them in the end anyway. Fixed odds betting terminals are not a growing market for Lad, even without the legislative threats against them.

In terms of timing, my best guess is this. From an Austrian economics perspective, money supply growth (M2 money supply statistics) has been slowing dramatically in the US over the past two and a half months. The growth rate since mid-January has almost halved. (I go over the concept of M2 and how its growth or lack of it affects the capital markets in this article.) Though money supply in the UK has been growing sharply as explained above, global markets still tend to follow Wall Street, which in turn is effected by M2 in the US. On a macro scale then, all stocks in general are receiving a monetary headwind which could get worse in the coming weeks. It will eventually be reversed when the monetary spigots are opened up even further, but that is several weeks away at least.

The best course of action for Lad bottom pickers then is to wait about 6 weeks for money supply growth in the US to bottom out and reverse. Keep your eyes on the statistics in the link above and don’t pull the trigger until growth rates start to increase again. They are published weekly. It is possible that long term support in the £1.20 range for LAD will be hit within that time frame, at which point one may want to start scaling in. Around June Playtech could come through for World Cup time and Ladbrokes could surprise to the upside, given the extremely low near-term expectations they’ve been setting up for the investment community.