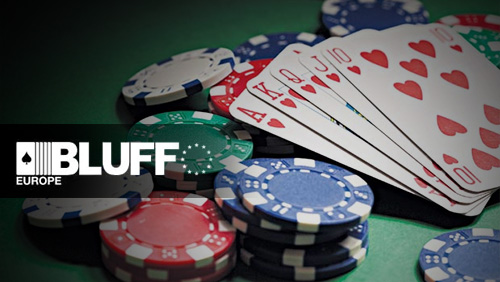 Lee Davy continues his confessions of a poker writer series with a look back at his successful BLUFF Europe serial The Ogmore Poker Tour.

How did you get into poker?

It’s a question that I have asked so many professional poker players, and for some reason I never really get excited by the response.

The stories have dried up.

The characters are dead.

I doubt there is a single writer of poker who came into the game with the sole focus of becoming a writer.

All writers are poker players who never had the luck to make the grade, did not have the requisite skills, never had the bankroll, or just realized that life was so much easier earning money through writing than playing.

But when you cut us open chips fall onto the floor, not ink.

I grew up in a little valley called Ogmore Vale. The type of place where you have sheep in your trash, instead of stray dogs.

Valley life is a simple life and for a very long time I liked it that way.

But there really isn’t that much to do except to drink copious amounts of alcohol.

So that’s what I did.

Gambling is very much a part of valley life. When you grow up your parents drag you to the pub with them and you sit and watch as they play dominoes and card games like Crash. Money will be at stake, but copper and silver are the only colors of coins you will see.

There was always a small group of younger men who would play Shoot The Pool or Three-Card Brag, but the money on the table was never really that deep. Enough to buy yourself a couple of pints, but you never worried about losing.

It was hardly going to break the bank.

So this was my education.

People stopped going to the local bookies and instead they started to phone in their sports bets from the mobile phone. Then after a while they stopped phoning bookmakers to place their bets and instead they placed the bets on their own through the Internet.

The brick and mortar bookmakers shut down and my Grandparents were forced to learn how to use an iPad.

It was just too easy.

This is where I think Sheldon Adelson does have a point. To remove ones right to make a choice goes against everything I believe in, and I think his motives are purely selfish, but there is no doubt for me that online gambling does make it so much easier for people to get hooked.

Life on the outside also changed.

Instead of playing Crash and Shoot the Pool we started playing this game called poker. A game that somebody had learned on the Internet.

It started on a Tuesday night.

I was part of a pool team and after the game had ended we would play the aforementioned card games and arm wrestle for money. Then the pool folded, and we needed a reason to keep getting out of the way of the women, so we started to play poker.

The women didn’t have to know. We kept taking our pool cues out and placing them in the umbrella stand.

At first we would play a game of £10 Freezeout. There would be around eight of us and we would dish out prizes to first and second. Then one week I remember my friend Eddie Ace brought his father along to play. His name was Steve and he would later be known simply as Eddies Dad Steve.

Eddies Dad Steve had gambling in his blood. He is one of those people the government believes is addicted to the Fixed Odds Betting Terminals (FOBTs). His day job was to shift rubbish for people, but his dinnertime job was to put that money into the mouth of the FOBT.

“I have a system Chingy boy.” He would say to me.

It didn’t matter how often I told him that Roulette was a game of chance and thereby no system would work, he didn’t care. He was like a stubborn little kid who puts the mince pie and bottle of stout out each Christmas Eve even though they are 16-years of age.

“So does anyone play cash games then?” Said Eddies Dad Steve after he had been knocked out of the Freezeout early.

He didn’t drink, and so when he got knocked out of the tournament, he would get bored.

That’s how we were introduced to cash games. It was £1/1 No Limit Hold’em (NLHE) and everything changed.

What started out as a night that would cost less than £30 (including ale), we now needed £100 just to have a single buy-in for the cash game. As the weeks passed more and more people were attracted to our game as the stakes grew higher and the word spread.

Eddie Ace invited his father-in-law to the game. Gary Acreman would develop the name ‘Sleeper’ because his lack of hand play would give you the appearance that he wasn’t even there, and BANG he would end up coming from nowhere to win the tournament.

Eddie Ace’s brother would come to the game. I called him The Mekon because his head was the same shape as the famous Dan Dare arch enemy (although for some reason I was the only person who knew this fact).

Local boys Skit and Wayne ‘Bill’ Jenkins would join the game, as would Neil Farm (so called because he owned a Farm) and Steve ‘The Rock’ John who earned his name by being so tight. The Rock introduced Tony ‘The Raincloud of Doom’ Thorne to the game, and kept apologizing because he was so miserable; Gareth ‘Whitey’ White would also join in the mix; and Bill would later introduce the game to the Pencoed crew: Danny Mac, Turkish Kurt and the hobbit like Bevan would also become regular fixtures in the game.

Our local scrap magnate Andrew ‘Too Nice’ Bayliss was next to stumble into the game, and then you had the Elvis impersonator John ‘The Mouth’ Winchcombe; our local petty drug dealer Terry ‘The Run’ Welsh, the man who listened to chickens: Bobby Eggs, and the owner of the pub Rob The Scot.

Soon the £10 Freezeout became a £10 rebuy and the cash game changed to a game of Dealers Choice (DC). The group quickly became splintered into two factions with one group playing purely the tournament and another just turning up for cash games.

Then an Iranian who used to play in Roberto Romanello’s game, called Landi, joined the cash game; as did the old timer Alan The Bookie, and suddenly the stakes got huge.

Plus we also had the added problem of trying to smuggle winnings and losses of a grand a time passed our old dears who thought we were playing pool.

They say that all addicts are liars and that was certainly true of this bunch.

With the exception of the likes of Too Nice and The Sleeper (who had money to burn), we all told our wives a shitload of lies to cover up the debt that we would often find ourselves in.

Nobody left the game though.

There was always money being handed around the tables in order to keep everyone playing. Somebody always owed somebody money. But nobody cared. The important thing was to keep the game running.

By this time I had started to work on the live tournament circuit and quickly realized that the same thing was happening at the professional level. There were more losers in the game than winners, and money was passed around in the form of loans to keep everyone in the game.

The only difference was the characters.

Whereas the professional circuit seemed devoid of them, my home game was bustling with them. Each night was a neatly wrapped script delivered to my door, and so the idea was born to write the Ogmore Poker Tour (OPT).

It would be the true tale of what life is really like for the majority of poker players. Why not use the buzzword and call it grassroots poker. It was an instant success. The Editor of BLUFF magazine loved the idea and the readers of the magazine fell in love with the characters.

They knew them, they could feel their pain, exhilaration and frustration – they were them.

It’s difficult to connect to a rags to riches story of a man who now flies around in a helicopter. Much easier to understand the man who has an addiction to the FOBT because he is desperate to earn a few buy-ins for his Tuesday Night Home Game.

But there was only one problem

I was writing about these people’s personal lives.

Readers of BLUFF Europe magazine knew more about these people than their own families. The lies, the deceit…my pen exposed everything.

I tried to change some of the names, but it just wasn’t the same.

The Ogmore Poker Tour eventually ran out of steam as I had to pull further and further away from the real true facts of the game.

But I had fun and earned a lot of money in the process.

It ran for a few years, and I have dreams of bumping into Ricky Gervais and turning the whole thing into an Office type comedy one day.

It will be a success because of the characters.

The charm, the sleaze, the sleight of hand, the generosity, the laughter, the tears…I loved them all…every single one of them.