Home / Poker / Confessions of a Poker Writer: My Four Best Poker Venues of All Time 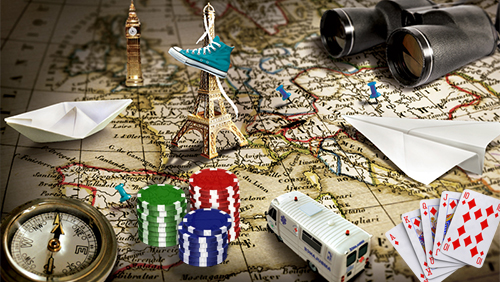 In this weeks confessions series Lee Davy takes a look back at his four personal tournament highlights.

Prior to 2010 I was more Karl Pilkington than Michael Palin.

I had been to Antigua, Cancun and the usual array of Mediterranean hotspots that British folk frequented with more frequency than a sailor used to visit the clap clinic.

But that wasn’t much to show for my 35-years on this earth.

A lack of drive, the illusion that other things were more important, and the fact that I was always flat broke all contributed to my feet being well and truly stuck on British soil.

Prior to 2010 a holiday was an endless supply of cans of Strongbow, Chinese takeaways, a comfy couch and plenty of TV.

Things have changed since then. The poker industry has been very fortunate to me and I have been able to travel all over the globe either writing or playing about/in a game that I love.

But where are the very best places that I have been?

Here is my top four.

Someone (can’t remember who) once told me that you are not a live reporter until you have worked at the World Series of Poker (WSOP). That is of course a load of old bollocks, but you cannot be a part of the poker industry and miss the most important festival of the year. It’s the equivalent of a football fan turning their back on the World Cup so they can watch Knots Landing.

The first year I went to Vegas for the WSOP I worked for PokerNews and PartyPoker. For the first four weeks I worked for PokerNews as a live reporter and found the work pretty tough going. The days are long and the sheer number of players versus reporters makes it really difficult to create decent story scripts, and whenever that happens my happiness diminishes somewhat.

The work for PartyPoker was a lot different. Ostensibly, my role was to follow the PartyPoker online qualifiers as they progressed through the Main Event. I actually found this work more difficult than the PokerNews work, but for very different reasons.

I have always found it much more difficult to report on a ‘section’ of an event because the interesting plot lines are less frequent because you are focusing on a smaller core of people which was the case with Party.

More recently I have stopped covering the live reporting and instead I have focused on creating interviews for CalvinAyre and my experiences out there are far happier as a result. I earn less money but have greater flexibility than covering the A-Z of a tournament.

That being said, if you are a fan of hard work and just want to earn money then this is the best time of the year for a live reporter. If you live in Europe then I strongly suggest you book your own flights and accommodation and ask your potential employers to assist with your costs. Otherwise you become unattractive to them because of your high cost base.

I was shitting myself when I first learned that I had to travel to Morocco for a gig. I was sure I was going to end up with an axe in my head, eaten by a tiger, or both. Then I learned that there were no tigers in Africa and chilled a little bit.

But it was daunting nonetheless.

But the place was wonderful.

The room at the Hotel El Saadi remains one of the best suites I have stayed in, and the visits to the local bars, restaurants, souks and Hammam’s made it one of my favorite journeys to date.

When the Marrakech stop was replaced by a trip to the Mazagan Beach Resort in Casablanca nobody complained more than me, but it turned out to be a wonderful decision.

When it comes to the most salubrious surroundings to play poker you don’t get anywhere better than this five star beach resort. It has absolutely everything and the central buffet was an adult Willy Wonka’s Chocolate Factory for food.

I would eat so much they would roll me out after each sitting.

When I first visited South Africa for a poker tournament I never left the casino during my entire stay.

Do not repeat that idiotic feat.

To travel half way around the world and to stay in a casino is the dumbest thing I have ever done, multiplied by a magnitude of 20 when you realize how much there is to see in this wonderful country.

It’s safe to say that I learned my lesson and the second time I visited I included a four-day safari and learned much about the Apartheid and Nelson Mandela.

The Emperors Palace is also a great venue. A little piece of Vegas planted into South African soil. The organizers can’t do enough for you and the writers are treated with as much respect as the players.

A quite wonderful place.

How can I have a list of the most exotic places on earth and not include Blackpool?

For every Eiffel Tower, David Copperfield and Lake Mead, Blackpool has a Blackpool Tower, Roy Chubby Brown and Blackpool Pleasure Beach. Also my old man used to always say that taking a family of four to Blackpool was more expensive that going to Vegas!

The Ogmore Poker Tour has visited the Grosvenor United Kingdom Poker Tour (GUKPT) in Blackpool for the past four years and we always come away in profit. I don’t know what it is about the place but it just loves the lads from the Valleys.

Live reporting commitments have meant that I have missed the past two seasons, but I will not be missing a third. It’s great to earn money writing about poker, but it’s even better earning money playing the game, and for a man of my earning potential a long weekend in Blackpool is about as fancy as it gets.

The camaraderie with the lads is something else and all we do over those 3-4 days is play poker. Whether it’s in the back of the car whilst traveling up the motorway, on the pool table back at the cheap and nasty B&B, or the tables at the casino – we have a dream.

A dream to forget about mundane life

A dream to stop emptying bins, fixing car motors, painting walls, tiling roofs, dealing with benefit dodgers and lumping scrap, and instead dream the one dream that all poker players have.

A dream of playing poker for a living.