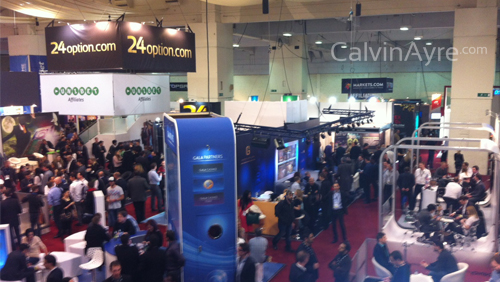 Jam-packed. That’s the best way to describe the conference floor today at day one of the London Affiliate Conference. The exponential growth of the LAC over the years is obvious, especially as organizers iGaming Business have moved the event to larger and larger venues to accommodate the masses, this year landing at the ‘ole faithful Earl’s Court.

When walking into the expo hall, the buzz, the booths, the models, the drinks, the food, the fun- it’s so much to take in and it really is impressive. iAffiliates hired an impersonator of The Queen, Harry Casino hired a Prince Harry impersonator, there were playboy bunnies, snow cones, popcorn machines, the Paddy Power Guinness Bar, a boxing ring at Coral, 24 Option models and the list goes on and on.

A particularly creative (and scary) stunt was arranged by MadAboutSlots.co.uk and Probability, two companies that recently struck up a partnership and developed bespoke mobile slots.  The name of the game is Triceraslots, so guess what? The stunt was a dinosaur roaming the conference floor and scaring the crap out of people. Unfortunately Health and Safety weren’t terribly impressed, but the stunt was as success regardless.

While all the shenanigans took place on the bottom level, one floor up hosted a series of sessions, all dedicated to the online gambling affiliate industry.

Keynote speaker Marcus Tandler was incredible, the only man I know who can deliver a presentation on SEO in 40 minutes using 356 slides and making every one in the audience laugh at least a dozen times.

Tandler took the crowd through the history of the internet and search engines, with a focus on Google and what is important to them today.“Google is driving innovation”, he said.  Google wants to give you things before you ask for them and by gathering more personal information such as your location, your schedule, the bus you take to work and all other sorts of data, this goal is on its way to becoming a reality.

When it comes to affiliates and Google, Tandler joked, “affiliates are f*&%cked” and confirmed that Google does not like affiliates, that is, if they don’t provide any additional value.

Traditional affiliates typically send traffic straight off to another site from which they are collecting commission, something that doesn’t add value to the user experience.  Tandler advised that affiliates should find something that makes it useful and worthwhile for traffic that come to their site, if they want to stay on the good side of Google.

Tandler also emphasized that affiliate marketing is not as simple as it was before- “affiliates need to stop being affiliates, they need to start being a brand”, he said.  Optimizing for keywords is a thing of the past and now its all about optimizing for the “persona”.

Another popular session today focused on the opportunities that lie for iGaming Affiliates in the US regulated online gambling market.  The panel was made up of experts in affiliate marketing, all coming from different backgrounds.

One of the general messages that all parties seemed to agree on is that the opportunities for affiliates in regulated America are up in the air as the rules and regulations are still being determined.  Panelist Steve McLoughlin pointed out it’s not just the affiliates that are brand new in this space, its actually everyone in the market.

The only regulated affiliate in America to date, Jon Friedberg of Overlay Gaming Corp, was also on the panel and said the reality of the situation is that the US Regulated market will not be working with many affiliates.

Too many affiliates causes headaches- the operator/affiliate/regulator relationships are complex and it creates an admin nightmare.  Rather the model will be a Master/Sub model with less affiliates and lower commission, but higher volume, Friedberg predicts.

“If you’re not in it for the long term, being a US affiliate is not for you- you won’t be making money for a while”, he said.

Jeremy Enke, an expert in online poker affiliate marketing said that for the regulated US market affiliates need to “take off their traditional affiliate hat and put on their general marketing hat”.

Enke also said that it will likely be a while before any affiliate is making big money in the US market using the traditional tracker method, but that if affiliates have New Jersey traffic right now, for example, that they should look into media buys as the regulated operators are offering big money for it right now as we speak.