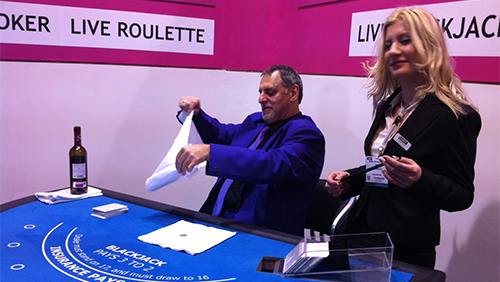 After a very successful first day, ICE Totally Gaming marched on in full force for day number two.   Most impressive about today is that a tube strike severely limited public transport to the ExCeL, doubling the time it takes to reach the venue for many people, however the crowd was still thick, busy and buzzing- this fact alone proves how important ICE really is to the industry.

Feedback on how the conference has been going so far was very positive as usual, with many comments including phrases such as “everyone is here” and “it’s the biggest event of the year”.

ICE Totally Gaming delegate David Leppo, CEO of Footballbet.com and Betmex.net, regularly attends conferences in Asia and America such as G2E and G2E Asia and was delighted to see some new faces at ICE Totally Gaming.  Leppo explained many of the suppliers for Asian and Latin American facing iGaming sites are in fact European companies so their massive presence at ICE was a new and welcomed experience for him.

Mr. Green, the very recent recipient of the Online Casino Operator of the Year Award, shared that while they do not have any booth space, they are using the ICE conference as a way to introduce their new Malta CEO, Bo Wanghammar, to the masses, along with the twenty five others from the Mr. Green squad.

BetConstruct is an example of a company that has used a big booth at ICE as an opportunity to get their brand out and educate the industry on their core and new products- ICE truly was their “debut” as a new and improved online and land-based sports betting and gaming solutions provider.  The predominantly Armenian group used the huge booth space to display their software solutions across all verticals and reveal their new live dealer product while entertaining guests with refreshments an amazing magician.

The use of celebrities as brand ambassadors is a popular marketing strategy at ICE itself and for gambling companies in general.  Rumor has it Footballer Michael Owen and Cricketer Michael Vaughan graced the floor with their presence today and Richard Skelhorn of BGO Entertainment told us Bgo.com’s new brand ambassador is Verne “mini me” Troyor.  If you’re based in the UK, the TV commercials with Verne start rolling as of tomorrow and that’s pretty frikin’ awesome if you ask me.

While all our senses were tickled on the conference floor throughout the day, there were a number of sessions taking place over at the ICE Conferences and the ICE Seminars, including the IMGL Masterclass.  This very gaming law focused seminar included sessions covering the convergence of online and land based, sports integrity in Europe and Asia, emerging jurisdictions and developments in emerging European jurisdictions.

Attorney NadyaHambach spoke on behalf of Bulgaria, a jurisdiction that recently approved a reduction in online gambling tax much to the delight of operators interested in their market.  In fact, it was just revealed that iGaming giants PokerStars and Betfair are officially seeking a license in Bulgaria.

Hambachsaid that the gambling act as it stands is a perfect fit for the regulators and that “at least it’s a very good start” for Bulgaria.  She confirmed that any foreign operator who is established in the EU or Switzerland can apply for a license and operate legally within the Bulgarian borders, licenses are good for five years and the licenses to give out are unlimited.

Over in Norway, AtleHamar of the Norwegian Gaming and Foundation Authority confirmed the monopoly remains, yet that fact that tournament poker is finally open is big news according to the Norwegian government.

Hamar explained that in Norway, the most revenue from the gaming market is from the sport associations and this revenue goes to charities.  He said if politicians want to open up part of the Norwegian market that they need to convince the sport organizations and the charities that independent operators can provide the same or more revenue.  “This is the political landscape in Norway”, he said.