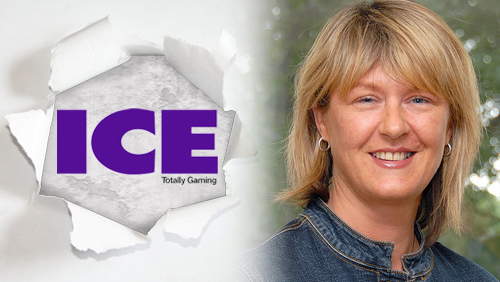 ICE Totally Gaming 2014 is around the corner and Kate Chambers is the woman in charge of it all.  Chambers serves as the Portfolio Director for Clarion and is responsible for the company’s gaming related conferences. With a savvy marketing background, Chambers has led a number of innovative marketing campaigns surrounding her events, with a brand new “SENSATIONAL” campaign for ICE Totally Gaming 2014.

I had the opportunity to sit down with Kate so she could elaborate on the new SENSATIONAL campaign for ICE, the quality of sessions we can expect, what adjustments she’s made since last year and what we can expect from Clarion in 2014.

Becky Liggero:  Thanks so much for joining me, Kate.  Lets start with your new “SENSATIONAL” theme for this year- what does it mean, what significance does it has and how will we notice the theme at ICE?

Kate Chambers: When I was appointed by Clarion to take charge of ICE and breathe some much needed energy and vitality into the event, I was struck by the way it had lapsed into quite predictable, me too style marketing.  I have always felt that just because an event is b2b it should not rely on tired marketing and couch potato ‘creatives’ – I use the term creatives loosely!  After all, the people we are marketing to are consumers as well and are used to seeing and responding to sophisticated marketing across all mediums.

We set about changing our approach firstly with the rebrand to ICE Totally Gaming, a new corporate identity and a new campaign.  In year two we launched the Talking ICE campaign, followed by Think Big which was short listed for a marketing award.  This year, as you know, the campaign is ICE SENSATIONAL.  SENSATIONAL has the same phonetics across our key languages which means it is understood by our audience, it’s simple, it’s relevant to the ICE experience and it serves as a platform to launch a host of add on experiences which we have introduced during the campaign such as the creation of the ICE brand scent.

It’s about Sensational business, Sensational networking and Sensational experiences.  We operate in a competitive market and as any brand custodian will affirm you need to stand out from the crowd and communicate your values and what you stand for.

BL: You have also arranged new seminars this year including an afternoon dedicated to Bitcoin, a Tribal seminar and some others- can you elaborate on these seminars and why these topics have been added?

KC: I’m very excited about our seminar programme for 2014, which, I believe is the strongest to date.  The topics are relevant and the opportunities from attending are vast.

The line-up includes Tribal Gaming, which we have been working with Victor Rocha on, the Bitcoin phenomenon, which will feature Jon Matonis, the Executive Director of the Bitcoin Foundation and a regular contributor to Forbes, there’s a full day devoted to gaming in India featuring key officials and stakeholders who will cover every aspect of the potential which exists in the world’s largest untapped market, we have three days dedicated to IT, Digital and Security when we will be demonstrating a live hack and there’s the International Masters of Gaming Law masterclass which provides a unique opportunity to be guided through the legal considerations and pitfalls surrounding Gaming Convergence, Sports Betting and new trends in emerging and European jurisdictions.

If seminars are judged on their ability to deliver content and insight which make the hairs on the back of your neck stand-up, then my team who put these together have delivered!

BL: Sounds great Kate, we’re really looking forward to it.  So we’re back at the ExCeL for a second year, how will the layout of the conference be different than last year?

KC: For the second year ICE is physically the biggest gaming event in the world.  Last year it ran the length of one hall – some 700 metres.  This was too long and our stakeholders told us so in no uncertain terms.  This year we have taken over both the north and south halls and moved from a rectangular format to one which is much squarer.  The space is 12% bigger but much easier to navigate.

BL: I think that’s a great move from last year.  I know you’ve also decided to skip the awards this year and put on a high level networking event instead, can you elaborate and tell us why?

KC: Our new  Networking& Business programme  has been developed in partnership with associations including IAGA, ECA, NCF and IAGR. Christened the World Regulatory Assembly at ICE, it opens with a pre-show Cocktail Evening on Monday which will provide an opportunity for guests to network and prepare for the week ahead.  This will be followed on Tuesday, by the World Regulatory Briefing, a high level, in-depth day focusing on regulation updates in key international jurisdictions and the annual Regulators’ Lunch, which brings together regulators from throughout the world to receive keynote addresses from influential industry figures.  The Assembly will be completed by the Legal Masterclass comprising a series of free to attend, show floor seminars and surgeries which will deliver up-to-date insight and advice for the wider gaming industry.

The Assembly cocktails, which will be a relaxed, informal and prestigious early evening networking event, is a natural progression from the Awards evening. For many attendees, ICE now begins with the launch of the International Casino Conference on Monday and the Assembly Cocktails provides the most sympathetic entrée.

BL: Sounds like you’ve got one great event in the works.  Is there anything else that you wanted to add?

KC: One of the key issues our post 2013 event research showed was how busy ICE is, with exhibitors on average holding over 50 business meetings over the three days.  I think it’s very important for visitors who are coming to London to try and pre-arrange their meetings which they can do by using our new mobile app which can be downloaded at icetotallygaming.com or directly from the app store.

The other key issue that I would advise visitors is to allow sufficient time to see the people that they need to and add some time simply to wander.  The really exciting prospect is there’s every chance the stand out gaming product or innovation of the year is going to be on someone’s stand at ICE – it’s a case of making time to find it.

BL: Before signing off, can you let us know what Clarion has up their sleeve in terms of new events and changes to events dedicated to the gaming industry in 2014?

KC: In 2013 we launched the Brasilian Gaming Congress (BgC) which was a big success and in May 2014 we are holding the first Japan Gaming Congress (JgC) which will feature Michael Leven, President and Chief Operating Officer of Las Vegas Sands as a key note speaker.  We have also launched our Corporate Intelligence division which provides market research and analysis, including bespoke commissions, across the gaming landscape.  Wherever we work and operate we do so in partnership with our stakeholders and the sectors that we serve.

BL: Thank you so much for joining me, Kate its been a pleasure.  We’re all looking forward to a bigger and better ICE Totally Gaming 2014.