Home / Poker / Poker Tells: Have They Changed With the Game? 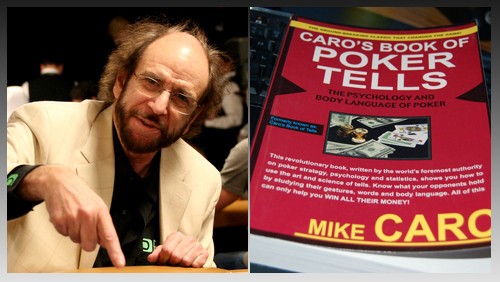 When I first got into poker the most cost effective way to improve my game was to purchase every poker book on the market. There were some gems (Elements of Poker by Tommy Angelo and the Harrington on Hold’em Series by Dan Harrington), some dogs (Play Poker Like the Pros by Phil Hellmuth) and one or two that were neither here nor there. 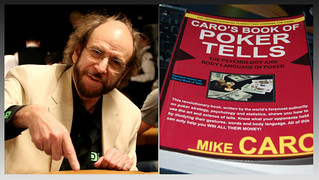 I remember reading the book and then heading to my home game to put the learning into good use. It was hopeless. When Caro’s book said they were strong they would be weak and vice versa. In the end the book ended up in Oxfam and probably still stands there to this day.

But not everyone shares my opinion.

“Caro can seem a little outdated, but some of the information in the book is still solid gold.” Said the FTOPS winner Luke Fields.

The game had changed immeasurably since Caro first wrote his seminal piece of work, but had the live tells changed alongside the triple barrel merging wotsits that befuddle my brain?

I sat down with IveyPoker Pro John Eames, Grosvenor Poker Pro Jeff Kimber, Ryan D’Angelo and Luke Fields to seek their valued opinion and it was an interesting tete-a-tete.

They all placed some stock in the benefit of live poker tells – some more than others – but they were unanimous in their view that Mike Caro’s book was designed to take advantage of the amateur players, and most of the games that the lads currently played in meant that a lot of the information in the book would be of no use.

“Most live tells that I look for applies to weaker players with less experience. Someone who is a strong live player may never give anything away or even do these things intentionally.” Said John Eames.

“I don’t put a lot of stock in the benefit of live poker tells unless I am playing against an amateur player.” Said Ryan D’Angelo.

“A lot of the players I come up against are not complete amateurs like a lot of the situations he describes {Caro}, plus we have the X Factor of people who look completely clueless, can’t stack their chips or remember an ante, look like they’ve never played, but they’ve played a billion hands online and know perfect strategy, bet sizing etc.” Said Jeff Kimber.

The players were all quick to remind me that live tells only incorporates a ‘part’ of the analysis of a poker hand, and should never be used on its own merit when trying to formulate a decision in a hand.

“Always remember to think back to your history with this player. What do they  look like? How are they dressed? You want to be creating a mental player profile.  Then look at their bets during the hand and use the entire stream of information to to asses their range.” Said D’Angelo.

“I think live tells can be important but only as part of the whole picture, so I wouldn’t base a big decision wholly on a tell, but if it tells the same story as other things – betting patterns, past history, how the opponent has been playing, plus obviously the strength of my own hand, they can be useful.” Said Kimber.

As my copy of Mike Caro’s book was in Oxfam’s window, I checked out his YouTube clip on his 10 vital poker tells and was keen to learn if they still had a place in today’s modern game.

“I look for lots of things when I am in a hand. From the way someone stacks their chips, to how they behave, where they look, how ‘stiff’ their body language is, whether they become defensive in terms of actions and posture, if they speak what they are trying to tell me, how they put their chips into the pot, whether they announce their bet, if their breathing changes etc.

“But a lot of that would also back up other stuff I’d noticed, such as the opponent has been playing really loose or something similar.” Said Kimber.

“I find that if people start talking they are usually strong. People aren’t relaxed enough to talk when weak as they are worried about giving something away. I also find excessive displays of strength too often mean weakness. Like aggressively throwing their bet in, staring their opponent down and trying to look really strong.

“Also, when players reach for chips before they even know how much they’re going to bet usually signifies strength. I also take some stock in the pulse in the neck. If someone’s heart rate speeds up then often the side of the neck will uncontrollably pulse, telling me that they usually have a big hand.” Said Eames.

“It’s timing over anything else for me” Said Fields, “I’m usually quite erratic with other stuff.  I’ll purposely try and do conflicting things, but I have been told on more than one occasion that I’ve rushed a bet or taken too long.”

Fields is not alone in his view that timing tells are extremely important.

“I think timing is everything,” Said D’Angelo, “Flop timing: you can pick some things up on them. It’s not a set rule but a vibe you get from player to player and scenario based. Bet sizes vs. board textures is also pretty key. It’s more about playing ranges and bet sizes than physical tells for me.”

“The way a player positions their hands is key for me and something I am learning more about, but have had some success with.” Said Fields.” I don’t know if there is literature out there covering it in more detail but I think people use their hands to show and release tension and nerves a lot. It’s not really a modern thing but is definitely something I’ve not seen mentioned in much detail.”

How many of our players give off fake tells?

“Against the right people, I will start chirping if I don’t have it, and try and look comfortable if I do.” Said Eames.

“I just think if you get too wrapped up in tells it might sway you to make the wrong decision. Usually I am trying to tell a story with my bet sizing more than with my body, but when I have the nuts I try and visualize having air and  hopefully my body mirrors that and vice versa,” Said D’Angelo

“I make a conscious effort to mix things up though, and give false tells and do random things – i.e. I will announce a bet, slide chips in one hand, splash them the next, sit up tight and stare at the pot, then relax and look round the room next hand.

“I never speak in hands as I think it’s too easy to give stuff away,” Said Kimber.

But none of this answers the problem I had in that first home game when everyone seemed to be doing the opposite of what Caro was saying. There were no professionals faking tells in my £1/1 cash game that’s for sure.

“Well it can vary from player to player, so you need to play with someone and notice it a few times until it’s reliable.” Said Eames

“It helps the more you play with someone. I am sure I’ve flip flopped many times on what that small gesture he just made actually means.” Said D’Angelo.

“A lot of tells can be different for different people so one of the most important things is to not base anything on a cold tell, and to concentrate and take note of every hand and other players’ behavior within it, even if I’m not involved.

“Some people shake when they have it, some when bluffing, but generically there are a few things, like stiffer body language and stiller movements (stop playing with chips) when bluffing etc. that I can use to my advantage.” Said Kimber

After listening to the wisdom of the four wise men I actually believe there is value in someone picking up where Mike Caro left off, and create a new book of poker tells. There is enough information that spewed forth from the mouths of these players, and we didn’t even cover online tells, which could probably fill a book under its own steam.

Luke Fields was right when he said that some of the stuff that Mike Caro wrote was still golden, but it really depends on who your opponents are. If you try to play your poker aligned with Mike Caro’s principles alone then you could get yourself in trouble, just like Phil Ivey did in 2009 when he followed Mike Caro’s 7th golden rule to never look back at your cards once you have memorized them.

Or perhaps Ivey was actually making an ingenious reverse tell?