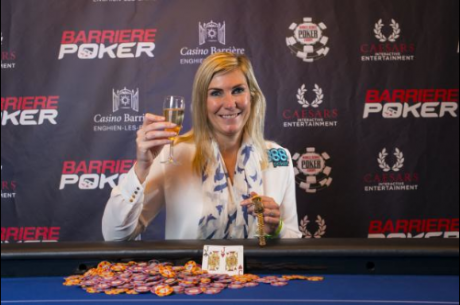 There is an uprising in the world of poker as the female contingent seem to be placing a pretty hefty stamp on the global major tournaments with final table appearances seemingly being secured one after another.

Yet despite this surge in form very few have managed to find the right blend of luck and skill needed to close one out, with one of the exceptions being the 888.com ambassador Jackie Glazier. The Melbourne native followed through on her impressive 31st place finish at the $10,000 World Series of Poker Main Event, by capturing the first-ever Ladies only WSOP event to be held in Europe for a €21,850 score and a nice piece of wrist candy.

Here is the champion giving us a female perspective of poker.

Your 31st place finish at the years WSOP Main Event earned you the title of ‘Last Woman Standing.’ How do these female biased tags make you feel?

I am proud of the title and do not consider it sexist. Women make up such a small percentage of the entire field and its understandable that there is focus on a woman making a deep run. Saying that my goal was always to be the last person standing. The only thing I dislike about the focus on last woman standing is that I feel it can create a lack of camaraderie between the females within the poker community.

Have you at anytime in your career been made to feel uncomfortable because you are a woman?

I have rarely felt uncomfortable at a table due to my gender, but there have been instances when comments have been made to me at the poker table, that I know would never have been said if I were a male. These include comments about how a hand played or condescending remarks on how I could play better, through to questions asking if my boyfriend bought me into a tournament. I have learnt to ignore these moments and stay focused on my game as much as possible.

What is your view on the state of the women’s game in poker?

I feel confident that the presence of women in poker is growing and I am excited to see the next few years unfold.  Hopefully we have an influx of new up and coming female poker players winning lots!

What’s your opinion on the role that the media play in promoting sexism in poker?

I don’t necessarily think the media is to blame for any sexism within the game of poker. When poker sites sponsor female poker players based on their looks and with limited poker experience this is the beginning of discrediting women’s role within the industry. The forums add to sexism within poker and the media provide pictures of people they believe are their target market. Now that more and more women are proving their skill on the tables I think this sexism will decrease, but I am doubtful it will ever disappear completely.

As a woman, do you feel under different types of pressure in your role as an 888.com ambassador than say Shane Warne or Sam Holden?

I don’t feel any added pressure in my role as an 888-poker ambassador in comparison to the male players on the team. I have clear guidelines on what is expected from me and I am excited about my future in poker both on and off the table.

There are far more men than women working in the poker industry, but what would you say to the people who believe it is easier for a female poker pro to become sponsored?

A poker sponsorship is a business agreement and a person will get sponsored based on the perceived value they will bring to a site. Obviously it is in a sponsor’s best interest if they can secure an ambassador that may help direct more players to their site. Sponsors also realize that women provide a massive hole within the market. I have always been mindful of this and hoped that my personality and results would be an attractive prospect for a potential sponsor.

Only 65 players entered the Ladies WSOPE event this year. What can we do to improve upon that number if we are to see more contests like this?

This was the first year that the WSOPE had held a ladies event and it was also added after the original schedule was released. Based on this it was expected the field would be small. Hopefully the growth of women in poker in general will help to increase the numbers in future.

The scrutiny about my looks at a poker table is uncomfortable for me. I started playing poker because I loved the game. As my results grew the discussions and comments about the way I looked, or how I dressed, also increased. I was not really prepared for this judgment to be honest. While I am ok about a complete stranger criticizing the way I played a hand, I am still working on coping with the comments about my appearance, which has no relevance to poker. I stay clear away from reading threads on forums unless they are specific to the actual game of poker.

How does it make you feel when you read poker articles that constantly make reference to the way women look?

I honestly don’t think that any credible media company, or site, really care about commenting about a female poker players appearance, unless that female has gone out of her way to attract attention in this area. I believe the biggest culprits referencing the way women look at the poker table are the people on the public forums. My advice to any female player who is bothered by the discussion of this topic is to avoid reading these threads.

Poker just loves to sexualize female poker players in anyway they can. What’s your view on this?

I don’t think this issue is specific to poker. It happens everywhere and poker is not immune to this.

Do you ever feel under pressure to be someone you are not in order to fulfill your role in poker?

Fundamentally I would never change whom I actually am regardless of how much pressure I felt. My role in poker is to play the best I can and to make the best decisions I can for my career and longevity within the game. As an ambassador this decision-making also extends to off the table activities. Sometimes you need to smile and work through an interview after busting even though it is the last thing you want to do. On the table sometimes you need to hide your emotions, smile and say ‘nice hand’ even though you want to strangle the person!