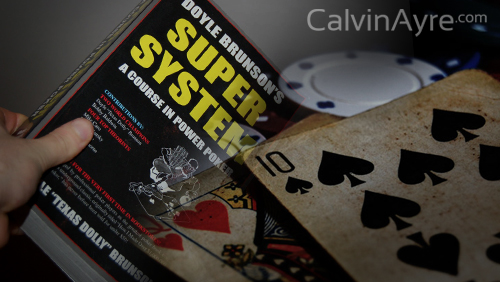 WSOP.com launched yesterday, heralding the beginning of a new era for online poker in the United States where the operators are government-approved and online satellites promise to become a major engine for live tournaments again one day. I say “one day” because right now the site is only live in sparsely populated Nevada. The timetable for expansion to other states depends wholly on legislation passing either in other states or in Congress. But everything has to start somewhere.

Once the future landscape of the American online poker business has begun to take shape, we’re likely to look back at the launch of WSOP.com as the jumping-off point for a new poker boom. With it will come the renewal of a whole slate of phenomena surrounding the game itself. I might not be looking forward to the return of novelty outfits at the WSOP, or celebrity poker on TV, but I’ll be happy to see all the new poker books.

Rounders, Chris Moneymaker, and the WPT were a powerful combination. One romanticized the game; the others dangled the promise to viewers at home that they, too, could become winners like the stone-faced, mirror-shaded guys they were watching on TV. A whole generation of poker players cites at least one of these, and often all three, as their entry point into the poker world. And quite a few of them will tell you that after that initial entry, they stayed in the game at least in part because some poker book changed everything for them.

For some it was a strategy book. Ever since Doyle Brunson published Super/System in 1979, neophyte poker players have been learning from the world’s best players via books. Studying a well-written poker strategy book can help an inexperienced but otherwise sharp newcomer pick up the game much faster than via experience alone. Even if they don’t make you a winner right away, they can at least help you learn how to break even so you can continue to gain experience.

For others it was an entry in the canon of poker literature, books like Al Alvarez’s The Biggest Game In Town, Anthony Holden’s Big Deal, and James McManus’ Positively Fifth Street. Poker has a language, a history, and a culture all its own, and those gifted with words have brought it to vivid life on many occasions. For a certain kind of novice player, falling in love with the game’s mythology and history – and imagining one’s own place within them – could be just as important as any strategy guide.

Whatever their particular type, the market for poker books has been shrinking since the peak of the game’s popularity in the United States. With the publishing industry itself in a state of shock due to technological changes and the subject matter itself badly overexposed, this was only natural. Even today you can browse the shelves at any used book shop and find a dozen dusty copies of Phil Hellmuth’s Play Poker Like The Pros, remnants of a bygone era when people wanted their strategy fed to them in animal metaphors. Occasionally they’re accompanied by some Bob Ciaffone, Lou Krieger, or David Sklansky tome pared out of the collection of some lapsed poker enthusiast. With few players coming to the game anew and so many old books out there for the occasional newcomer to choose from, many of the past’s poker bestsellers wouldn’t have much of a market if they were published today.

Once Americans in more than just one desert state are check-raising each other online, though, things will be different. A new generation of players will be coming to the game, and quite a few lapsed players will probably be returning to it, too. They’ll get a lot of what they’re looking for on the same Internet that brings them their poker games, but they’re going to be looking for good poker books, too.

I expect that poker strategy guides will probably be less prominent as learning tools when the new American boom arrives, if only because multimedia coaching sites became the norm for learning about poker after the last boom. Books are old tech, and all other things being equal more people are going to use newer tech when given the choice. But they’re far from obsolete. A really good poker strategy guide is a transformative thing. Players will carry one around with them to study whenever they have a free moment, marking it up and dog-earing its pages, building a relationship with it as they learn its secrets. Just ask anyone who learned to play poker tournaments between 2004 and 2006 how they felt about Harrington On Hold’em and note the faraway look in their eyes as they start to answer.

Just because I expect them to be less prominent and influential on the whole doesn’t mean that I think there won’t be many poker books published. On the contrary, there will probably be a lot of them. The publishing industry has changed significantly since the peak of the poker boom market. With the maturation of print-on-demand services, self-publishing is now well within reach for just about anyone. E-books are also far more prevalent than they used to be, lowering the barrier to entry even further if somebody has a book that they really want to put out there. This means every old-timer with dozens of stories to tell, every self-declared expert who ever thought someone else’s book was a piece of crap, and every player who wants to share her unique outlook on the game with the world can put their thoughts into the public’s hands more freely, more quickly, and more cheaply than ever before.

There’s zero doubt that we are going to see an awful lot of bad poker books when the game’s popularity is once again on the rise. But we’re likely to get some pretty good ones, too. Whether they’re books that might have gone unpublished at another point in time, or volumes from the best voices from coming generations, many of them are going to come about because their authors will have easier access than anyone before them to a market of poker players eager to soak up their knowledge, opinions, and experiences. I’m looking forward to seeing the results.